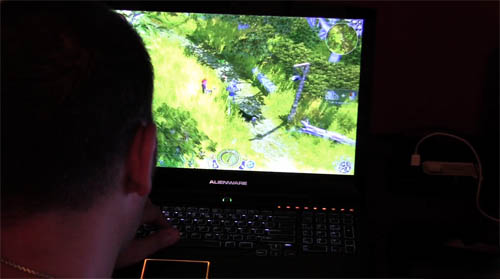 A little known feature of Sacred 2: Fallen Angel on the PC is the ability to integrate with Dell's LightFX keyboard lighting system.  The LightFX system backlit Dell's now defunct XPS laptop line with numerous colors, while the LightFX SDK allowed developers to control these based on what was happening in the game.

Now that Alienware is fully integrated into Dell, the latest Alienware M17x laptop from Dell also supports their LightFX system.  The problem with Sacred 2, is the game doesn't appear to be working properly with the keyboard lighting system, and there doesn't seem to be a way to disable it in the game.

In an interview with Driver Haven, Ascaron had this to say:

SC2Team: Eric from Dell has shown us the LightFX feature during GDC this year and I thought its a cool feature to build into the game. We use LightFX to support the gamer as a feedback system. Example...hitpoints are red flashing, if healthpotion is needed the Dell starts flashing, special achievements and the Dell starts applauding in rainbow colors. There are a few more functions to be built and connect the game with the LightFX from Dell and Alienware. The good thing : It just took us 30 minutes to build a first sample. We also can use the LightFX for other gimmicks like the Xbox 360 controller vibration on a PC.

The problem is right now all it does is cause random flashes when getting attacked, or the occasional spell effect when casting.  There's no health feedback or anything of the sort which was mentioned in the interview.

Hopefully Ascaron, who is now bankrupt and rolled into a new studio, can find the time to patch this feature to make it:

Here's a video of it in action.