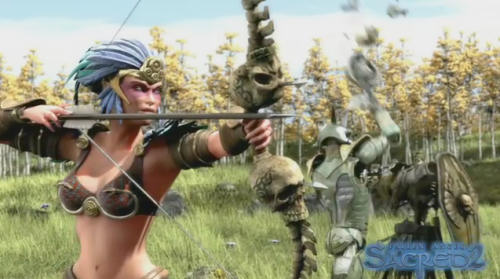 It sure isn't easy being undead these days.  Whether it's Call of Duty and it's zombie mode, or Left 4 Dead and it's full co-op campaign - the undead have to keep their head down for risk of being re-dead.

Now the undead need to watch out for another game, Sacred 2: Fallen Angel.  With 16 player co-op on the PC and 4 player co-op on the Xbox 360 and PlayStation 3, there's a lot for those undead to worry about.  The latest trailer taken from the game's intro shows off a handful of the in game characters teaming up to beat down swarms of bony bad guys.  All I'll say is a giant hammer and brittle bones don't mix well for one of the parties involved.

Read on for the full trailer.