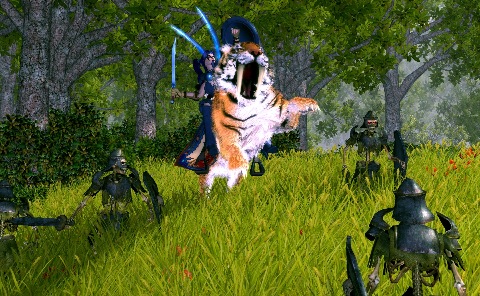 Yes, a Seraphim on tiger back is dangerous. Add a
few more and you've got angels on kitties that even the largest dragon
will learn to fear.

When playing on a PC, you and 15 friends (16 total) can jump online together and explore Sacred's massive overhead map, or any of the 200+ dungeons scattered throughout. On the XBox 360 and PS3, you'll be limited to 4 players that all share the same screen, or area, of the map (don't quote me on this, but I get the feeling that internet play will not be hampered to the same screen, but I was getting the feeling that may be the case). PS3 and Xbox 360 players will also have the option of playing together locally, so you won't need an internet connection to get in on themultiplayer goodness. Just hook up three other controllers and off you go.

With Sacred, you could play multiplayer 2 ways, either on a Battle.net inspired server that Ascalon runs, or from your own private game. Of course, playing online will ensure that the folks you play with won't be able to cheat, and gives you the option of comparing yourself to other players around the world. Otherwise, you also have the option of running a LAN or internet game on the PC, or setting up a private game
over PSN or Live.

You have the option of running co-op campaigns, where you and a few friends (up to 16 on the PC, 4 on the 360 or PS3) can go through the main story of the game, leave it open in a free for all where only secondary quests can be played and the entire map is available to explore, and arena modes where the same groups can fight waves of enemies or each other. Enemies scale up and down as players drop in or out, keeping the balance even. You don't have to keep playing with the group if you want to be alone, just go to your own game and come back when you are ready for more multiplayer action.

After playing some games single player and seeing the widespread damage some of the spells and combos can do, you'll want to get back in on the group mayhem. The spells look fantastic, and seeing more of them on screen at once just makes them that much more awe inspiring.
You want to see 4 Dryads hurling fire and ice at their enemies at the same time, trust me. 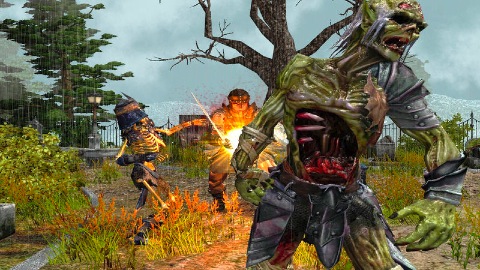 The best part of all of this is the variety. With 6 character classes and a large group of abilities to choose from, you will probably be at least a little different from the buddy you've got you just HAD to play a Shadow Warrior as well. Like games before it, Sacred 2 has multiple power sets for each class with their own tiered attributes.  With the ability to switch powers asquickly as switching runes, you won't have to level up the same class again just to be different.

There are a lot of different play styles already in Sacred 2, even in it's current states, and Ascaron has a few more months to polish what is there. The console versions don't look to have all the flexibility that the PC does, but there's still plenty to be had cooperatively for
those who want it.