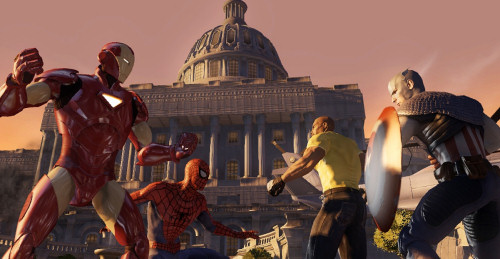 Stan Lee, creator of all things good in the Marvel universe, will play a crucial role in Marvel Ultimate Alliance 2 when the game launches on September 15th.  This will be the comic creator's first video game appearance after a cameo in nearly every Marvel related movie in recent years.

With the San Diego Comic-Con in full swing, it's the perfect time to unveil some juicy nugget of info about the game.  If having Stan Lee on board as well as an official release date wasn't enough - well how about two more character unveils?

Gambit and Jean Grey will join the squads of MUA 2, both from the X-Men Universe.  Gambit will don his brown trench coat and stave, with the ability to throw explosive cards.  Jean will keep her familiar telekinesis attacks and levitation, while sporting that sexy yellow and green outfit we've all grown to love.

IGN had a some sit down time with the game and came away very impressed, especially with the cooperative play available thanks to the fusion power system.

I saw Invisible Woman put Hulk in a hamster ball he could run people over with and Thor start up a tornado that Gambit flung card after card into so that enemies were getting tossed up before getting blown up.

It sounds like Marvel Ultimate Alliance 2 is coming together nicely, and the best part is - September 15th isn't that far away!