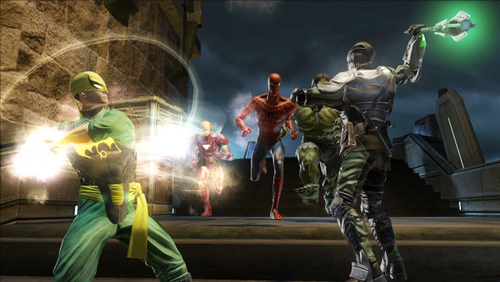 One of the most unique aspects of the upcoming co-op Action/RPG Marvel Ultimate Alliance 2 is the ability for any two characters to "fuse" powers together.  What this does is it combines any two superhero powers into a devastating attack that's a mix of the two.  With twenty four playable characters in MUA2, that's over 250 different combinations of fusion powers.

The folks at the MTV Multiplayer Blog sat down with the studio's president to get the details on these powers.  They came away with some surprising information - the game will feature DLC with new characters - and those characters would have new fusion powers that would work with the existing roster of twenty four.

“That’s one of the things that makes DLC potentially challenging but also really rewarding for players,” Guha Bala, Vicarious Visions President said. “Every character on DLC will be able to have unique Fusions with every other character in the game. So when we ship one character we also have to ship it to work with all the other Fusion Powers as well.” It'll be incredibly interesting to see how these powers play out in the game's cooperative mode.  It almost forces players to try out different characters to experience the different fusion powers and figure out which is better for a given situation.  Not only that, it now forces more player communication and teamwork to pull of these moves.