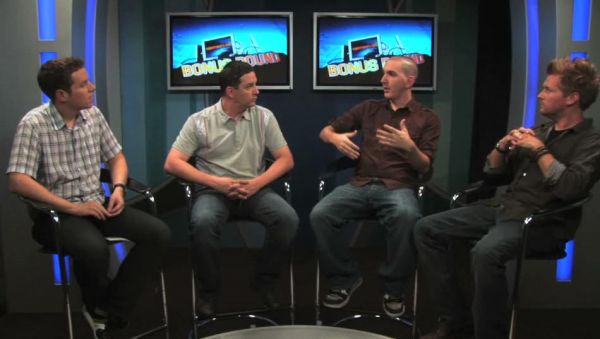 The latest Bonus Round episode on GameTrailers.com features a diversified panel that lays out some great perspectives on co-op as it currently exists and how they see it evolving in future games.

They close out the episode by discussing the approach that developers take when considering co-op implementation, and also the different types of game-playing that co-op fans partake of (couch co-op, online co-op, lack of co-op, and even MMO cooperative traits).

Bowling also made sure to mention that the Special Ops mode was designed with the Call of Duty single-player campaigns in mind, wherein the experiences were pushed along and driven by a solitary character that often accompanies the player. In this regard, Infinity Ward is designing their particular "flavor of co-op" -- as he calls it -- to be an intimate experience, one that omits playing with random people. Is this a new fad? If so, I don't like it. Nevertheless, these high-profile co-op gimpings are setting a bar that other games (such as Borderlands, Crackdown 2, Left 4 Dead 2) are going to have to adjust in order to round out the many different ways to play co-op.

Thankfully, the discussion includes a lot of positivity toward co-op itself. The panel gets some wires twisted at one point by describing certain team-based competitive games as being definitively co-op, but we beg to differ. At the very least, we're glad that co-op is being more and more recognized as a desirable way to play the hottest new games.