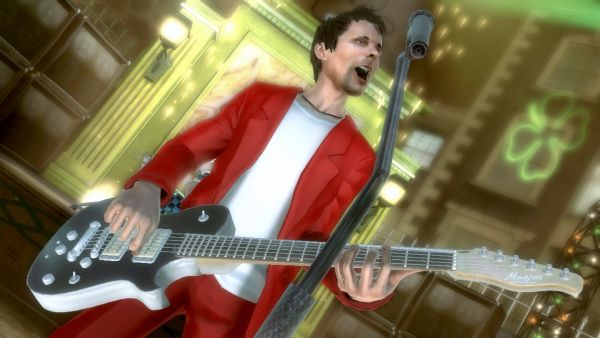 MUSE lead singer Matt Bellamy has lend his likeness to Guitar Hero 5, Activision announced today.  The always entertaining Bellamy talks about being digitized in the game during the latest promo video.  After donning the spandex and glowy balls, he imagined himself playing the song Plug-in Baby in some of the bands biggest performances.  The song is featured on the GH5 soundtrack, and is one of my personal favorite songs of the band.

Seriously, if you haven't seen there concert DVD HAARP, do yourself a favor and pick it up.  The entire band has an amazing stage presence, and the video really seems to capture some of Bellamy's antics.  He even recommends jumping around and spinning in your living room for the full effect.

In other Guitar Hero 5 news, this announcement was rumored late last week along with another popular Guitar player from the early 90's - Kurt Cobain. Since the Bellamy rumor came true, it's a safe bet we'll see an announcement of the Nirvana front man sometime soon.

For now keep yourself entertained with some kick ass MUSE songs.  Their new album, The Resistance, comes out in a few short weeks.