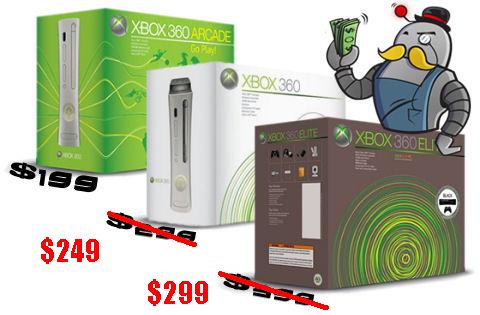 To absolutely no one's surprise, Microsoft has dropped the price of the high end Xbox 360, the Elite.  Likely in response to the new PS3 Slim, the Elite's price is down a Ben Franklin to $299.  The Pro model, with a 60 GB hard drive, is being phased out, and prices for that version are chopped to $249.  The hard drive-less Arcade remains at $199.

Rumors of the Elite price drop have been going around for weeks now.  It's nice to hear the official word on it.  Now I'm pulling for a 120 GB hard drive price drop, as my poor 20 GB is full to overflowing.  Anyone planning to pick one up at the new price?