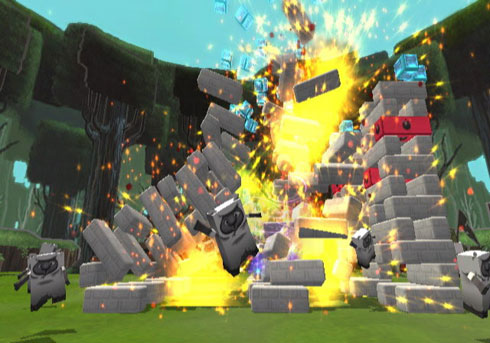 There are two requirements that qualify a game for this column.  As long as the game meets just one of the criteria, I'll use it.  The first is appeal to a younger audience.  Movie and television tie-ins meet this requirement, but there are certainly many other kid-friendly games too.  Second, any game that appeals to the more casual crowd, or even non-gamers, can be covered.  The game we have under consideration today fulfills both of these criteria, and does so admirably.  Boom Blox is appealing to children, and great use of the Wii remote means non-gamers will love it too.

Boom Blox is similar to Pickup Sticks, stacking dominoes, and Jenga, games that almost everyone is familiar with.  The various levels are comprised of blocks, stacked up in rather impressive piles.  While goals for each level differ, you are usually tasked with hitting, shooting, or even blowing up blocks.  That's all there is to it.  Boom Blox's simplicity is very appealing, and is one reason why the game is perfect for  those who normally wouldn't even play a game.  You can pass the Wiimote to your grandma, 3 year old nephew, or even a time traveler who has never seen a video game before, and each of them will probably understand just what to do. Adding to Boom Blox's accessibility is the use of the Wiimote.  Control schemes for Wii games are a mixed bag.  Many add waggle just for the sake of waggle, when standard button presses would do just fine.  Other (sadly, few) games get it right, emphasizing the precision capabilities of the Wiimote.  Boom Blox is probably the best example of the latter.  The game wouldn't work on any other system.  The pointer is used to select a block, and by pressing A you can lock on.  With a flick of the wrist, the ball/gun/pull/whatever is executed.  The motion sensors allow for velocity and power to be controlled by the Wiimote.  If you really swing your arm back and throw it hard, the ball will shoot out like a bullet.  A lazy lob will send it in a smooth arc.  Different levels require a different touch.  Other than Wii Sports Resort, Boom Blox is the game to play if you want to show off the motion sensing and pointing capabilities of the Wii.

The game isn't the most impressive graphically, but there is a clean, cartoony style that mitigates this somewhat.  It's clear that most of the horsepower is spent on the impressive physics engine.  Each block reacts just as it would in the real world.  Slight movements are often enough to send an entire tower crashing down to the ground.  Pieces bounce around, bumping other pieces, like a big set of dominoes that you don't have to clean up!  Half of the fun is watching the mess, even if you fail the level.

The animal characters in Boom Blox are cutesy, and quite appealing.  Sheep, gorillas, bears, and all sorts of other animals are available.  The story in the game is loose, at best.  Told via static cut scenes, the narratives are certainly nothing epic or particularly memorable, but they are funny.  Sheep as knights in shining armor are hilarious, you must admit.  My son really enjoyed all the characters, and they do add a certain emotional attachment to what might otherwise be a very abstract exercise.  But really, the main appeal of the game is the blocks themselves. The dedicated co-op modes are, for the most part, enjoyable.  The only issue is, every mode is not available from the beginning.  You have to play through the levels in order to unlock everything.  The first co-op section is a shooting gallery of sorts, and feels a bit out of place.  I'd rather have been able to choose what I want to play from the beginning; it's called Party mode, after all, and nothing brings a party to a screeching halt faster than having to play through levels in a hurry to get to the good stuff.

While the co-op is good, the rest of the game is enjoyable for co-op fans as well.  Single player mode in particular is quite fun with a group of people.  We found ourselves passing the controller, trying new strategies and offering each other advice.  While this is not technically co-op, it feels cooperative in many ways.  Working together, with good communication, to achieve a common goal is a fun time, and there's a sense of accomplishment when it all works out.  "Pass the controller" may be an old standby for co-op, but it still works, especially in a game as charming and engaging as this one.

If you own a Wii, you really should check out Boom Blox.  The sequel, subtitled Bash Party, claims to be stuffed with even more multiplayer goodness, including more co-op modes.  Between the single player, Party modes, and designing your own levels, there's a lot to love about Boom Blox.  It is a showcase game for the Wii console, and is a fine choice for youngsters or those who don't normally play video games.  Experienced gamers will love it as well!