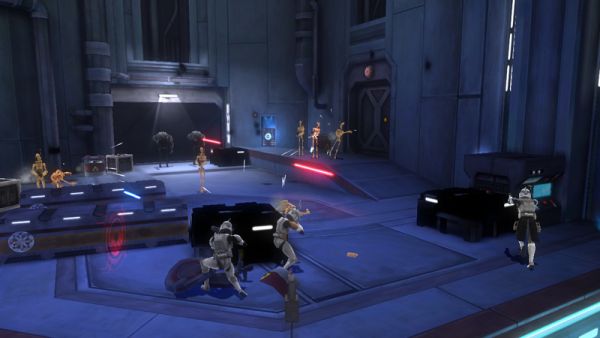 Star Wars fans seem to be divided into two camps.  There are old timers like me, who are original trilogy purists, and look down a bit on the newer material, including the prequels.  Then, there are the newer fans, who realize Star Wars is cool no matter what; come on, lightsabers, the Force, robots, spaceships, aliens, what's not to like? (Except Jar-Jar.)  The latest Star Wars game, The Clone Wars: Republic Heroes, may tend to please the latter group, but even for us oldies, it looks like fun, with the inclusion of co-op.

The Xbox 360 demo for the game has now been released for your downloading pleasure.  (Queue it up here.)  According to Bitmob's interview, Republic Heroes will include drop in/drop out co-op, and puzzles similar to those of the LEGO Star Wars games.  I know this grumpy old Star Wars fan will be trying it out with his two Clone Wars fans.  Anyone else going to check this one out?