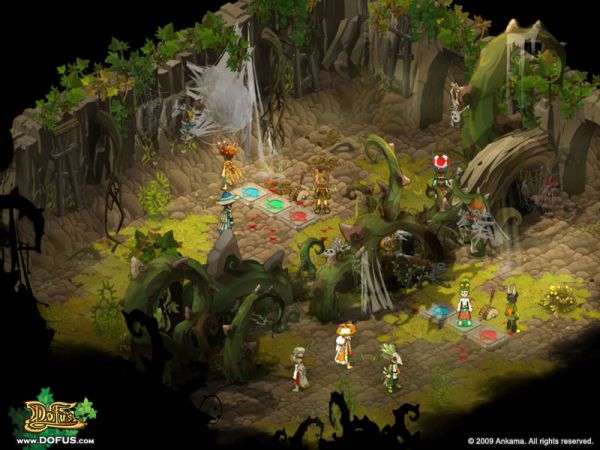 Dofus is a free online “Tactical MMO” built for players of all ages and walks of the earth in a bright visual style, accompanied by straight forward PC controls and phenomenal characters. After the huge success of Dofus in Europe, we are starting to see the testing phases of Dofus 2.0. With a new marketing strategy, impressive (still free) flash design, and upgraded graphics, Ankama hopes to make new waves in the United States.

When “Tactical MMO” came up, so did a few questions. Tactical games suggest a specific strategy with limited movement, while MMO suggests a full world to explore and attack as seen fit. Dofus utilizes both of these gaming styles, giving you free roaming movement with a limited attack grid when engaging an enemy. This forces some level of strategy, and in a sense Co-op. As a free flash game, it is an MMO, but only 4 players may enter your game at any time.

The main “hero” characters come in a variety of shapes, sizes, colors and both genders. Each race had a very artistic feel to them, eager to fit any personal tastes the players may have, with additional talents to accompany them. The archer class was played on the PAX show floor, with impressive ranged attacks as well as a melee attack for close attack.

During the fighting phase of the game, the player picks a starting point on the grid to begin the attack phase. Co-op comes in handy here to flank, block, and effectively attack the enemy. You have ranged attacks that can reach a certain set of squares, and once the combat began it became reminiscent of Final Fantasy Tactics. Once combat was over, the game re-opens the map and you’re free to once again roam and interact.

Instead of simply buying upgrades from the game, the entire economy of the game is player driven. If you need something, you’ll have to find a character with that item to purchase it from. This is where the MMO aspects come in to play. Players will designate what items to sell, and even while they are offline, their character will set up a shop and sell to other wanting players.

The system was very visually impressive, enjoyable to play, and the main game is free. You’ll want to play this with friends to get a variety of classes doing a variety of things in the game, the very essence of co-op. Did we mention the game is free?

Editors note: The first Dufos is available to download and play, even in the United States.