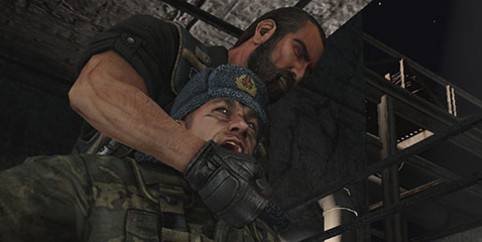 Rogue Warrior, the game based on the might-possibly-be-real-but-maybe-not adventures of Ritchard Marcinko, was at the Penny Arcade Expo for some hands-on time. At this point, the game seems to be moving in the right direction, if given some more care.

I first notice that the controls in Rogue Warrior were mapped very similarly to the Call of Duty titles, so I was right at home. Starting in the middle of a mission in what appeared to be a storage facility, I caught on to the shooting mechanics and cover system without a hitch. In fact, I was really happy that someone had integrated Call of Duty controls with the Rainbow Six Vegas third-person cover mechanic. (Of course, there's a huge difference between seeing your customized character and the grizzled face of Dick Marcinko...)

Shooting was straightforward, including iron sights (yay!), blind fire from cover, and good hit detection. Grenades worked nicely, and bounced when they should. The environment's lighting subtly nudges you where you're supposed to go, but the levels are pretty linear anyway, and an arrow on your radar helps if all else fails.

One of the features that Rebellion is touting is the quick-kill option: approaching an enemy presents you with an option to slash your target's throat, or wrap around behind for a choke hold and neck snap. In my play time, it didn't appear that the player could choose which kill move to use...all of them were sufficiently bloody and vicious, but seemed to be chosen at random.

We were told that multiplayer would be small squads of 4 versus 4, online only. Co-op was once included, but has since been cut.

Now's the part where I add a personal note: when chucking grenades, Marcinko also hurls insults and taunts that one would expect to hear from the Xbox Live trolls...not from a mature, disciplined Navy SEAL. Profanity was to be expected, but this was something different. Without spelling it out here, let's just say that I don't expect anyone to actually enjoy the more cinematic qualities of Rogue Warrior unless they are fans of the titular character.

All that said, Rogue Warrior felt like a competent shooter, albeit somewhat arcadey. The controls were tight and the enemies reacted well. After this small demo, though, I'm sorry to say that another generic shooter game will be hitting the market this Fall. Rebellion still has a good chance at a quality game, but they'd better take it soon.