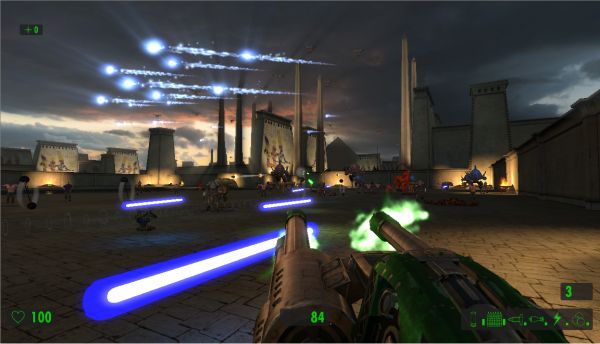 The visuals looked really sharp, and the controls were spot-on. The reticule is now more prominent, and subtly moves "toward" the screen when your line of sight is interrupted by an object. As before, the enemy's health is represented by your reticule's color, but now it's easier to see the green, yellow, and eventually red when your aim passes over them.

There have been numerous balance tweaks to the engine; original developer Croteam has been hard at work on this updated version.

The game will retail for 1,200 MS Points on the Xbox Live Arcade, or $15 on PC. Disc versions will be available in stores as well. According to publisher cdv, the sales of this game may justify the same treatment for Serious Sam: The Second Encounter.

Watch the below Epic Trailer -- which expertly makes use of Clint Mansell's Lux Aeterna -- and check out the new screenshots.