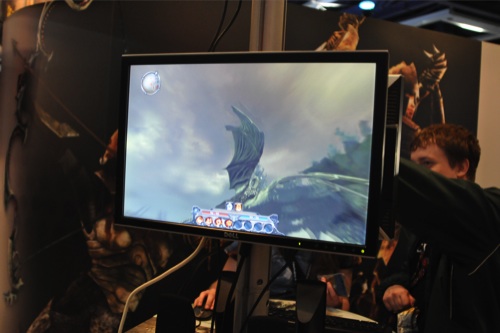 Divinity II: Ego Draconis is already available in Germany, published by DTP Entertainment; cdv Software Entertainment is bringing the title to the United States sometime this winter, following some engine polish and full translation. The premise of the game is a snap for any fantasy gamer to get into, but the missions have a depth that any hardcore RPG fan would appreciate.

A single-player-only game, Divinity II takes full advantage of the lack of other players right off the bat, letting you take full control of everything down to the combat. You can pause the action at any time to queue up special attacks and even swap weapons or gear. Combat is also a cross between turn-based and real-time, depending on your approach -- most basic attacks are available in swipe/dodge style, while more potent moves and spells (and enemy strikes) cost mobility for a brief moment. Being more a fan of twitch combat, I enjoyed seeing the character jump and roll; this is something that more RPGs seem to be including, and I like how Divinity II continues to blur that line between action-oriented and stat-based combat.

The way that the game controls and manages abilities gave me a Guild Wars vibe, but Larian informed us that any similarities were coincidence, and that the entire interface was their own design. Speaking of the interface: it was really slick, and easy to get the gist of. Animations within the interface were a welcome touch; swapping out swords has never been so subconsciously fun. Your character starts out as a Dragon Slayer, searching the world for tasks that will gain you notoriety and cash. You can customize this character to your liking (I'll come back to that later on in the preview). What comes next astounded both Nick and myself: Larian told us that there are up to 24 possible solutions to every quest! During the demo, we saw one small example of this, wherein each small change to the quest had an impact, such as reading the letter that you're supposed to deliver or even more fun: reading the minds of the NPCs that are hiring you. Yes, you can read minds...and although it costs experience points each time, it's well worth it in the end to find every bit of information pertinent to the quest. What started out as a courier quest with only two trip legs ended up a dark love affair with a twisting story all in itself. Furthermore, your involvement has consequences in the world: double-cross an NPC, and they'll raise their prices on you or become less cooperative. Heavy, man...heavy.

About halfway through the game (which can be anywhere from 12 hrs to 30 hrs in, depending on difficulty settings and side quests), you are given the opportunities to become a Dragon Knight and to obtain a Battle Tower, which is a home base of sorts. As a Dragon Knight, you can turn into a dragon literally anytime, complete with aerial attacks and special abilities that are as unique to your dragon as they are your human form. Controlling the dragon is straightforward, but it feels super clunky thanks to some really bad animations; it would feel much, much smoother if there was no dragon animation at all. The Xbox 360 version felt more natural with the gamepad, but still pretty clunky. Hopefully they'll have ample time to iron out the animations. In the meantime, the dragon quests sound really cool, one example being an attack on an enemy stronghold that saw us blasting over a compound that was levitated high in the air over a valley. Different portions of the compound had different purposes, and had a decidedly RTS quality to it: one tower spawned enemy units, another healed them, and yet more served as anti-air turrets. You can destroy them all in a systematic attack if you wish...once again calling forth a distinct RTS feel to the scenario. Customization is a huge part of Divinity II. From the start, you can create your character, switching gear and clothes as you accumulate them. Once you unlock your Battle Tower, you can visit an NPC there that will re-customize you at your whim, from hair color all the way to gender...if that's your sort of thing. The Battle Tower also houses a necromancer that can help you cobble together a pet to be summoned at any time, an alchemist that helps you create potions, and runners that will fetch you ingredients and items...if you provide them with the equipment they demand. The Battle Tower itself can also be customized with greenery and items collected. Finally, the coolest part of all: your dragon can be customized. We were told that armor can be fitted, and the gender of the dragon will match that of your Dragon Knight (for all the good that will do...). We didn't get any more info than that, but Larian was eagerly nodding when asked about the dragon customization, giving me the impression that more lay beneath the surface.

To make up for the crazy length of the game (25 hrs for main quests on easy mode, up to 60 hrs or more for 100% completion), Divinity II is simplified in other areas: you can hold 120 items to start (and that's expandable), but every item takes exactly one space, with no size nor weight encumbrance. Items can be sent to your Battle Tower at any time, locking them into your storage chest until you physically go retrieve them. You can teleport to captured areas via Dragon Stones. And the skill system is not rank, class, nor tree based: all skills can be mixed and matched to create your own preferred combination (quick note: every skill has a preview video loop, so that you can see how your character looks performing it; it was very cool).

When in between quests, some other small quirks of the game will serve to entertain players; attacking 29 rabbits will spawn a 12-foot mega bunny with fangs and a black belt in karate (no, seriously; it knows karate!). Visiting your necromancer to customize your Frankenstein-inspired "pet" is good for a laugh. And once again: you can turn into a dragon at any point, flying over and under the environment for kicks, with no cost to your character nor time limit.

Divinity II: Ego Draconis will keep anyone busy for a long time, and fans of dragon lore are going to want to check this one out. cdv Software is bringing the game to PC and Xbox 360 platforms this winter.