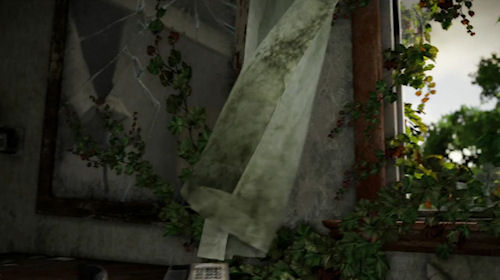 Another game that was revealed at this year's VGA Awards was a game named The Last of Us.  Created by Uncharted developer Naughty Dog, The Last of Us looks to be an interesting departure from their most recent series which focused on archaelogical adventure.  The new game is a post apocalyptic story where it appears some sort of virus has wiped out the world's population.  The trailer focuses on a middle aged man and a young girl as they attempt to survive in what's called their "daily routine."  It already feels much darker, but still strongly character driven.

If the style of the game looks somewhat familiar, it's because it bears a strong resembelance to Enslaved.  That should come as no surprise as The Last of Us lead designer, Mark Davies, was also the lead designer on Enslaved.  Both games take place in a beautiful world where nature has retaken society from humans as we see crumbled architecture mixed with plenty of green plants.  Another similarity it seems is the dual character relationship and while little is known about our lead characters in The Last of Us, we can only hope Naughty Dog goes a slightly different route than Enslaved by including co-op play.

Numerous reports around the web allude to co-op play, but nothing has been confirmed yet.  The Last of Us is a PlayStation 3 exclusive and set for a 2012 release.  We'll have more info on the game if co-op play does get confirmed - until then - enjoy the trailer.