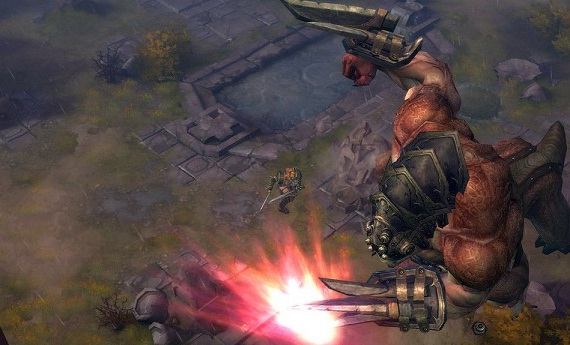 Gamasutra sat down with lead technical Artist Julian Love, and lead content designer Kevin Love from Blizzard to talk Diablo 3.  Despite the game being shown at Blizzcon twice so far, as well as playable on the show floor of E3, PAX and other conventions - we may be over a year away from its release.

Gamasutra wants to know why.

Kevin Martens: Here's the secret to Blizzard games, and this is a secret that won't help any of our competitors: endless iteration. We'll take something, we'll put it in the game. Maybe we'll like it when we put it in, maybe we won't. We'll leave it in there for a while, we'll let it percolate. We'll play it and play it and play it, and then we'll come back. We might throw it all out, or we'll throw half of that out and redo it.

It can be a long time, but it is fun to work on as well. That's the thing that keeps you going. Multiplayer always works, and the builds are always playable. We've played them constantly, and it's fun. You actually look forward to the weekly play session even though the game is still in progress. That's what keeps us going, and that's also why it takes so long. We'll do it over and over again until it's just right.

And there it is folks.  Quick - go start your own game development studio and use their formula while you can!  But seriously, it's good to know that Blizzard does put so much time and effort into tweaking and updating their titles.

One of the other things that's holding back some Blizzard titles, namely Starcraft 2, is an updated Battle.net.  While Blizzard is promising that Diablo 3 will use the new service to it's fullest, that's not where their efforts are being focused.

Primarily at this point, we're interested in trying to make the co-op game as fast and as easy for players to get into as we can.

More co-op support is our primary interest, and the rest of the Battle.net stuff, we'll develop as StarCraft II develops it. We're watching that process, and we definitely like what we see.

So there you have it.  A tight, polished, cooperative experience for the PC when it's done.  Diablo 3 - you can't get here soon enough.