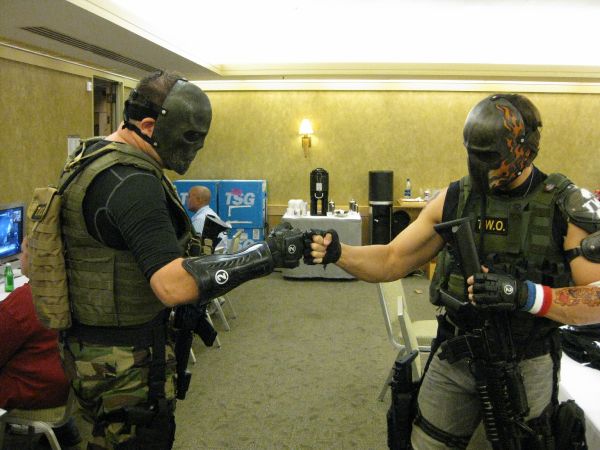 In our first interview with Matt Turner, producer for Army of Two: The 40th Day, we covered why he chooses co-op, what’s changed for The 40th Day, and what “organic co-op” means.  In the second part of the interview, we dive a little deeper into the game’s morality system, discuss how the enemies are getting into the co-op spirit, and discover how gun customization can be a co-op activity.  Check it out after the break!

Co-Optimus: You mentioned players are rewarded based on the moral choices they make as well.  Can you talk a little bit more about that morality system?

Matt Turner: We showed one at E3 with the security guard and the guns, but what’s cool about that is that you come into these situations that are pretty standard [for shooters].  It’s a weapons locker, right?  Most games you come in, take the guns and keep playing.  In reality, you’re stealing somebody’s stuff so there are consequences to that.  So you’re offered a choice [of whether or not to take the guns]… It’s an A or B choice, and if we’re playing together and I make the decision for the partnership, then we have to live with those consequences for the rest of the game; and there are gameplay consequences as well as story consequences… It’s all throughout the game; it’s not just those moments.  There’s second-to-second morality, there’s hour-to-hour morality, and there’s minute-to-minute morality.  Depending on the actions you decide as a team, your morality will go up and down towards the negative or towards the positive and you always have to be aware of it.  If you just want to run through the game and mow everyone down and you just don’t care about the morality, that’s fine.  But if you want to get involved in that mechanic, you can really manipulate it and look at it like “let’s save these hostages here, but take these guns there just this one time.”  You can really manipulate it and play with it to represent yourself as a character in the world.

Co-Optimus: What sort of impact does that have, then?

Matt: The story is really more about Rios and Salem and the relationship they have as they get out of this crazy catastrophe; what they do, who they are in that world.  So [through the morality system] you’re kind of creating the story yourself by saying “this is who we are.”  As for the characters themselves, they might start getting a bigger rift between them and be more aggressive, or they might get tighter and back each other up a little bit more. Enemy view of Salem and Rios when they're more aggressive

Co-Optimus: We noticed as we were playing that the enemy A.I. has been greatly improved over the first one. It even looked like they had the same moves as Salem and Rios. What’s changed there?

Matt: That was kind of an idea of trying to get this synergy and symmetry between the players and the enemies.  It’s this concept that anything the player can do, the enemy can do; so they’re going to manipulate the environment the same ways that you do; they can do step jumps, they can heal each other.  If you shoot a guy in the leg, he might bleed out.  But if his buddy gets to him he’ll drag him to safety and heal him… [So we wanted] the enemies to really have this sense of being dynamic and aware of the space around them and will use it to try and take you out.

Co-Optimus: Along the same lines, the partner A.I., when playing the game solo, also seems to be a bit more intelligent. Were there similar improvements made to the partner A.I. as well?

Matt: That was a matter of taking this idea that was great [from the first one] of having a partner A.I., because it is a fun experience and some aspects of it are awesome… and refining and tweaking it.  Now [the A.I.] is way more aware of his surroundings so he will jump into cover, will offer to step jump here, or tag enemies there.  He will always have suggestions and awareness of what he is doing.  So he is active, but not overactive so he’s not constantly badgering you.  He’s just there and he’s aware of what’s going on so he actually feels like a living breathing character in the world.  As opposed to the first one where he felt like a guy you were just ordering around so he was like your lap dog.  We wanted to take that sense out of it and make him a person in the environment that you could trust to do what needs to be done. Building guns can be a fun co-op experience, just don't test them on your buddy

Matt: Absolutely, it’s intrinsically co-op.  If you go into the weapon customization, which you can do any time you’re not in combat… [you can] tweak the guns as [you] want to. But if I load out with a burly shotgun, a desert eagle, and some ridiculously powered sniper rifle, [my partner] will probably want to load out with an assault rifle and have more of a ranged capability to their load out.  [We wanted] players to talk about how they’re loading out and how they want to have the tools they’re going to need, so that at any given point in the game they have access to a sniper rifle, or a shotgun… it’s always best to have a little bit of both worlds.

We wanted to thank Matt again for taking to the time to talk with us in such great detail about Army of Two: The 40th Day.  We also wanted to thank EA again for inviting us to the community event, and we look forward to hearing more about this co-op title over the coming months!