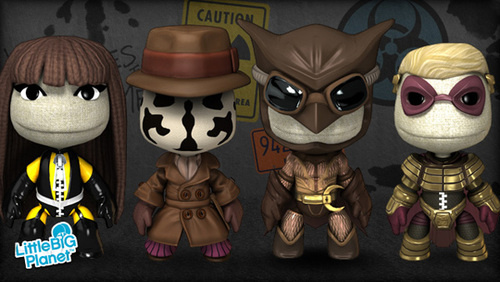 We've got a nifty little update for you regarding LittleBIGPlanet, recently released in a Game of the Year edition.  First of all, Sony is giving away free codes that allow you to download the Norse Mythology pack for the game.  Should be fun to recreate "What's Opera, Doc?" in LittleBIGPlanet form.  (What, I'm the only one who had that idea?)

If you'd rather pay for your Sackcontent, well, look no further than this Thursday.  A Watchmen costume pack is coming to the PSN.  No price is available yet, but we're hoping these little Watchmen goodies aren't as overpriced as other recent downloadable efforts.  I predict about 4 hours before someone creates a Watchmen LBP level that's better than The End Is Nigh.