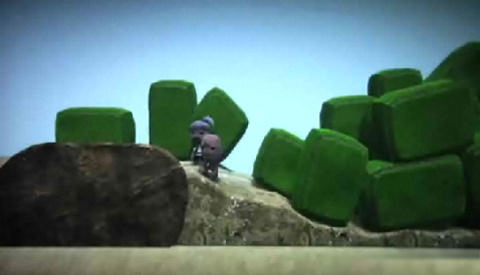 Sony truly has a new icon on their hands with SackBoy from LittleBigPlanet.  Who knew such a cute little guy could cause such a fuss?  The public beta was unleashed onto the internet last week crippling sites that were giving away keys to readers.  The game is a platformer at heart, but adds a unique content creation mode with a splash of social networking to bring a co-op gaming experience we really haven't seen yet.

While the game will launch without the online version of the level editor, you are still able to build levels and share them online for co-op play.  The game uses a really unique interface and system to do this.  First, when you browse the online planet you are shown popular levels to choose from.  These are levels that have high ratings and lots of downloads.  From there you can view details on the level, including tags about it like "quick, difficult, clever, colorful, etc."  Using these tags you can link to other levels with similar features, or perhaps other levels by the same author.  The nice thing about this, especially in the beta, was I had no difficulty finding people to play online co-op with.

The full game will feature a story based adventure, and during that adventure there are specific sections clearly marked for co-op play.  Whether it's puzzles or vehicles or whatever; you'll have to have at least one other person to participate in the challenge.  For the user created content in the beta, I really didn't find any levels specifically written for cooperative play.  The potential is there though to really do some cool things, and hopefully the story mode will bring inspiration to level designers to come up with clever uses of co-op.

It's really hard to describe what kind of game LBP is, because really it's just a basic platformer with physics based puzzles.  The entire experience though just oozes style left and right, and I was easily entertained for hours doing...well basically doing nothing but running, jumping, and making SackBoy dance.  There's so much personality in that little sack - and on a online network devoid of voice chat - I found it fairly easy to communicate using the tools an controls given to you.  You can easily customize your character by collecting unlock able items, and you can even customize any level you are currently playing in real time by sticking stickers and small objects around it.  While I didn't get a chance to play with it much, it does appear to let you import your own objects and textures using the PlayStation Eye.

I'm really anxious to dig deeper into LittleBigPlanet, but I think I'll wait for the full version.  The beta wet my appetite enough and put a rest to any fears I may have had about the game.   I really hope the online co-op creation is patched in shortly after launch.  Creating levels with my friends is going to blow away hours upon hours of my life, and I'm sure I'm going to love every minute of it.