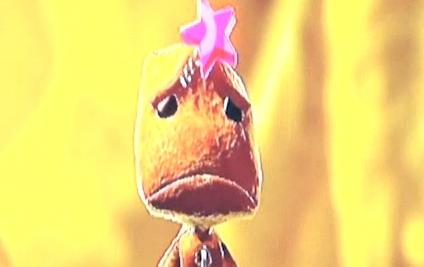 Just look at that poor, poor Sackboy.  Have you ever seen a more adorable, and yet mournful face?  Do you think he's sad because he has a pink fairy wand stuck on his head?  No, he's sad because of all the online issues in LittleBigPlanet.

The "Play.  Create.  Share" feature in LBP has been deactivated since the game's launch.  Yes, the game that promised to take community involvement to new heights has been lacking sorely in that department, to put it mildly.  The folks over at Media Molecule explain why this feature, and others, have been disabled so far.

Until we're happy with server performance we've switched off a few online features, Play Create Share scoring being one, in order to help the service to remain stable. The good news is that we're not far from reaching stability, so expect this to return soon. As soon as there's an exact date for its return I'll let you know.

In all fairness, there have been issues with stability in LBP.  I have had very little luck playing online at all myself.  I appreciate that they are taking steps to fix this.  However, they really have dropped the ball with this title.

Delaying the title due to the song controversy, the mega-lag at launch, and some draconian level pulling tactics have all put some serious egg on Sony's face.  It's like Castle Crashers all over again.  The game remains one of the finest single player experiences of the year, in my opinion, but that's not exactly what was advertised, now was it?  Hopefully the patch will release soon and bring back the buzz this title had six months ago.