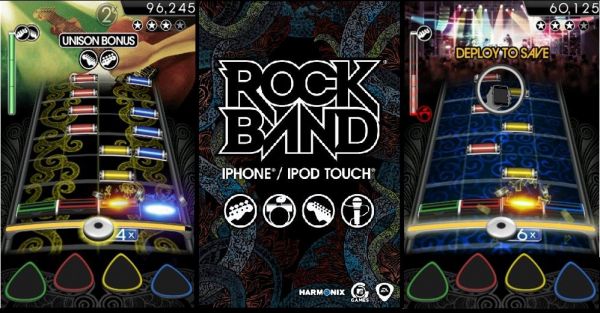 Music games are great fun, so it's only natural that folks want to play them on the go.  Previous efforts haven't exactly been strong in the co-op aspect, either implementing it poorly (Guitar Hero: On Tour) or eliminating it entirely (Rock Band Unplugged).  That trend looks to change with Rock Band for iPhone and iPod Touch.

Using the bluetooth capabilities of the iPhone, up to four players can rock out together, on drums, guitar, bass, or vocals.  Twenty songs will be included with the app, which is scheduled to be released sometime this month.  More songs, naturally, will be available for download in-game.  If I had an iPhone, I'd be all over this app.  (Curse you lousy AT&T coverage in my area!)