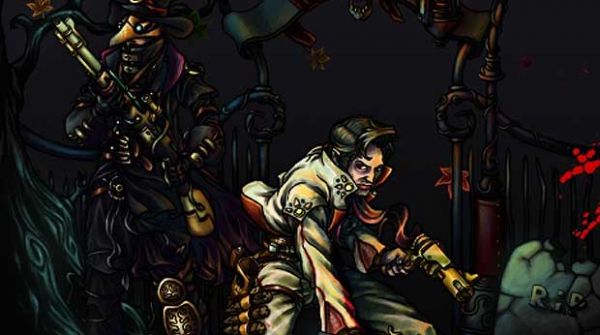 It may be a long way off, but Alive & Undead is sounding like a great co-op Halloween Treat for 2010. Alive & Undead isn't necessarily a zombie game as it sounds, which we've been saturated with this past year - it's more of an "everything horrible" kind of a game. You play as either Mr. Smith, a Vampire and Elvis impersonator, or his hired gun Welson. Welson is a witch hunter who's been asked to help Mr. Smith avenge his murdered (by his own bloodlust) family, and help cure him of his Vampire curse.

President of Shortfuse games, Johan Hermerén has this to say about Alive & Undead:

"We evaluated other engines and we chose Emergent’s technology first for Colosseum and now for Alive & Undead because its power and versatility suited our needs. It allows us to be incredibly creative while being flexible enough to adapt to our studio’s evolving development goals, from use developing a 3rd person brawler with Colosseum on Xbox Live to creating a 2D side-scroller co-op shooter for PSN. Its multi-platform abilities and easy integration with third party middleware enable us to meet aggressive production schedules with a minimum amount of stress."

Alive & Undead is said to be a fast paced, brutal, and very uncensored beat-em-up title. We're not sure exactly what enemies you'll be facing, but we do know the beat-em-up aspects will be loaded with guns, rather than fists or swords. The formula for Alive & Undead is 1 part side-scrolling beat-em-up, 1 part action-shooter, 1 part modern game mechanics that allow for some impressive brutal attacks, and 2 parts co-op. Keep an eye out for more information as it becomes available, as Alive & Undead has until Fall 2010 for release on the Playstation Network.