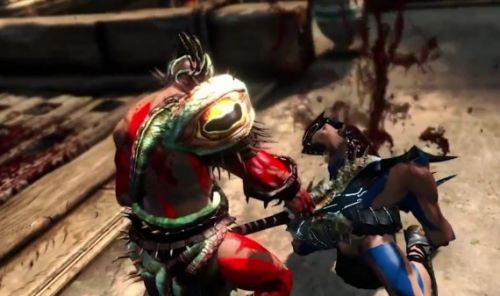 After hearing the announcement of the upcoming prequel, God of War: Ascension, we found ourselves looking at a video of a God of War multiplayer mode for the first time and hoping for some co-op love.

The mode featured in the video below showcases a Domination-style game mode, where two teams of four battle over control points on a map. The players on each team are required to dismantle the other team’s offense and gain control of the map. Once that team gets to a certain point, they will have the chance to slay a giant monster (like the Cyclops featured in the video) and end the game.

Check out the gameplay footage for yourself, courtesy of Gamesradar:

You’ll also be given the chance to customize your characters, as well as their classes, depending on the god you choose to pledge to. Greek gods such as Zues, Hades, Poseidon, or Ares will grant your character a certain patch of abilities depending on which you are loyal to.

Based on that selection, you’ll be able to gain magical abilities, items, different things you get from these unique gods that influence your style of play. In other games, it would be considered your classes,” says lead combat designer, Jason McDonald, “Some are based on damage, some are based on healing and sustaining, some on magical attacks. We don’t want to reveal what each god will do just yet, but you can expect some key differences. It’s a team-based multiplayer experience and we want to make sure you’re not always going with the same guy, like a game of Street Fighter where everyone picks Ryu. Sure, a gory multiplayer mode is great news, but what about a co-op mode? It seems as though it can be done after watching this video, and the God of War series has hinted at multiplayer and co-op modes on several occasions; Ascension is no different:

Other multiplayer modes will be included, though the team is unable to name any at this time. It’s unclear whether Ascension will include a standalone co-operative mode. Some team members coyly hint at it, and Lead Game Designer, Mark Simon, says that could design it if they wanted to.

Will God of War: Ascension eventually include co-op? History is sort of against us. However, the big titles are including more co-op features these days, so anything is possible. We'll just have to keep our eyes (or eye if you're a cyclops) peeled and our fingers crossed for anything that might surface.