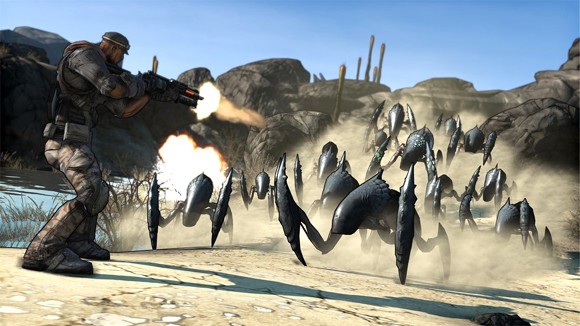 The official Gearbox Forums are keeping tab on some of the issues plaguing Borderlands players in terms of bugs and glitches.  The full list currently sits at two solved issues, eight open issues, and ten under investigation.

It's a good idea to head over there if you are experiencing any problems to see if it's a known issue, and whether or not there's a work around.   The most serious glitch affects 360 and PS3 gamers, and it appears to be save file corruption.  Nobody likes losing a character they put 20+ hours into.

I myself haven't encountered any of these glitches thankfully, though I did manage to trigger a fun one last night.  While playing as Brick I had entered my beserk state and ended up getting killed.  I held X to respawn, and when I came back, I still had my super speed.  It lasted up until the next time I triggered beserk, but it was sure fun to zoom around the land.  My co-op partner wasn't as amused, she had a hard time keeping up!

In other Borderlands news, we had reported about some unique preorder incentives created by the game's producer Mikey Neumann.  Namely, you get to play with him and he'll drop you some loot.  Kotaku followed up with Mikey and chronicled their experience.  It's a solid read.

As of 3 p.m. U.S. Central time (the timezone for Gearbox's Plano, Texas headquarters) on Thursday, Neumann estimated he'd logged 72 hours in Borderlands. That would be more hours than have passed since Borderlands' release on Tuesday. Of course he'd been playing it pre-release, but still, it's a lot of time spent on a game - especially since this week, like mine, is Neumann's vacation.

It's good to see developers taking such a hands on approach with the community, and seeing a commitment to excellence and support.  It's easy to see just how passionate they are about making their game, just as we are passionate about playing it.

Don't forgot about our Borderlands Co-Op and Giveaway which is tomorrow!