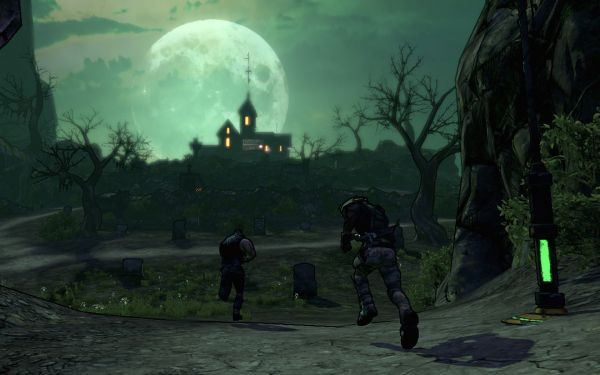 After an addictive few weeks with Borderlands, the game ended up on the bottom of a pile of a ton of new fall titles.  With the promises of new content on the way, I knew it was time to head back and get reacquainted with my old friend.  The Zombie Island of Dr. Ned has been hyped for weeks now, promising a handful of new areas, new monsters, and almost 50 new quests.  But does it deliver?

Once you download the content, upon booting up Borderlands, the game tells you exactly how to access it.  That is, you simply hit up any fast travel point, even if you don't have it unlocked, and away you go to Jakob's Cove.  Immediately you are greeted by a hilarious intro movie giving some background to what exactly happened on this island.  Soon you'll be tasked with meeting Dr. Ned, "who is totally not Doctor Zed from the last story at all."

While Borderlands was ripe with humor throughout, the new content is jam packed with it at every corner.  Not only is it in your face with cut scenes and over the top dialog, but it's subtle in things like creature names, signs in the game world, and a were-skag with a funny hat.  My personal favorite is Dr. Ned's name tag.  Like I said, it's subtle, but you'll chuckle for sure.

The atmosphere presented in The Zombie Island of Dr. Ned is top notch, and the art designers have really outdone themselves showing off the strengths of the Borderlands style.  From grave yards to run down mansions, to green-ish sky with a giant glowing moon; there's plenty here that sucks you in, and keeps you coming back for more. There's plenty of new monsters to kill on the island as well.  Most are zombified versions of creatures from the Badlands, but there are some unique ones.  The above picture is of a Tankenstein, who comes in a few different flavors, all of them deadly.  There are were-skags, giant bats, skeleton raaks, and suicidal zombies.  Plus, there's midget zombies.  So while most might seem like texture swaps, something the game even pokes fun at with Dr. Ned, there really is quite a bit new mixed with the old.

I did have an issue when playing the new content with my level 37 soldier on the second play through.  Upon entering all of the zombies were level 42 or 43, making them near impossible to kill.  Thankfully, co-op saved the day, and a friend joined as level 49 Lillith to even the score.

The missions are pretty much repeats of the same style missions we had in the game.  Collect objects, kill a target, or talk to a character.  That's not to say they are bad in anyway, in fact, there's a good number of added characters and dialogue here that keep you pushing onward.  The battle to get up to Ned's safe house is particularly intense, and hilarious to boot.

This generation DLC has become the norm, and a lot of companies are trying different ways to add value to their games and extend the shelf life.  We've seen everything from additional characters, weapons, skins, and game modes added through DLC, but I think Gearbox has it right.  DLC needs to be these self contained stories that can stand on their own.  DLC needs to be the "expansion" pack of yesterday.  This is something Gearbox is all too familiar with, and that's why it works so well in The Zombie Island of Dr. Ned.

The Zombie Island of Dr. Ned is out now for the Xbox 360 and PlayStation 3.  It costs $10.  As of now, the PC version of the content is unannounced.