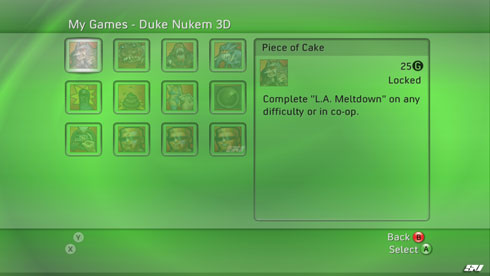 Joystiq got their hands on some rumored pictures of Duke Nukem 3D for the Xbox Live Arcade.  Well not leaked pics of the game so much, but leaked pics of the dashboard into the game.  Exciting, I know.  Listed on the achievement page is a picture of an achievement called "Piece of Cake" which is unlocked by completing the first episode in co-op mode.  Duke 3D was always know for its great co-op play, so it's nice to see that it (allegedly) made its way into the Xbox Live Arcade release.

One dubious thing in regards to all of this is a second screen that Joystiq posted.  It shows the games menu listing, but also notice the camera icon on it? (Pic after the "Read More")  That means the game supports the vision camera.   Duke 3D would be an odd choice for using the camera.  Of course our fantasies run wild with vision support for the strip club scenes into real live strip clubs.    What, we are the only ones that thought that?  Aaaargh! 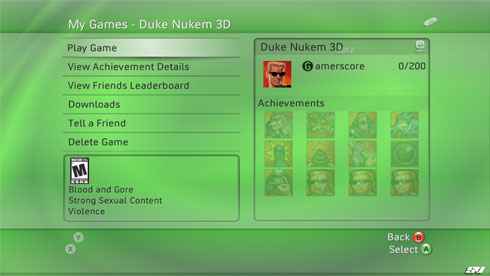