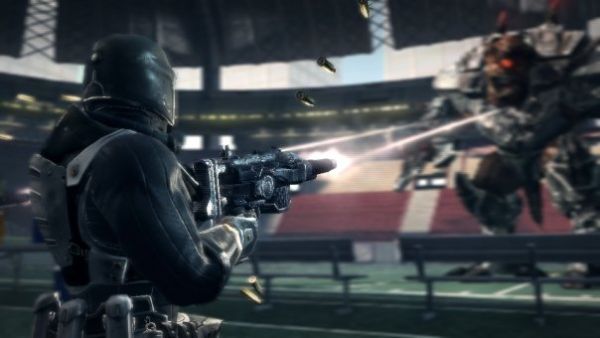 The Duke Nukem Facebook Fan page has posted what appears to be a screenshot of something Duke related.  The album titled "D-Day Pics" shows one shot in the infamous stadium level.  We saw some video footage of this level back when 3D Realms shut down earlier this year, adding to the authenticity of this rumor.

Not much else is known about "D-Day,"  though it was teased on November 25th with a simple post on Facebook that said "Duke Nukem doesn't stay down for long."

It remains to be seen if the Facebook page is even officially related to what's left of 3D Realms.  Rumors popped up a few months back that the despite what came out earlier this year, the company wasn't completely dead, and they still were working on Duke Nukem Forever.

According to Shacknews, there are rumors that the 2002 side scroller starring Duke Nukem called Duke Nukem: Manhattan Project is going to be re-released on XBLA.  There's also new trilogy of portable titles coming, though those have been delayed.

Lets hope somewhere, buried in this news, is hope of another great co-op experience with Duke Nukem.  Duke Nukem 3D is still some of the best co-op games out there.  There's a lot of rumor and uncertainty here, but we still hope to kick ass and chew bubble gum with our friends once again.