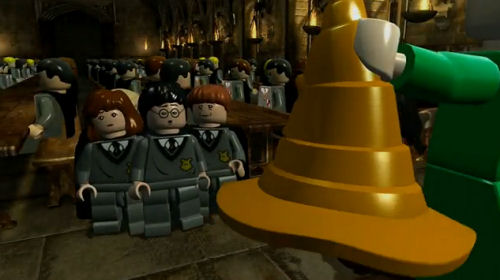 Harry Potter and the Half Blood Prince was released this week on DVD and Blu-Ray, so what better time to explore next year's Harry Potter videogame called LEGO Harry Potter: Years 1-4.  There's no firm release date yet, but we do know the title will support co-op play in similar fashion to other LEGO titles.

With the trio pictured above, we hope for three player support.  That way Ron and Harry can fight over Hermine in familiar Double Dragon co-op fashion.

The trailer for the game focuses on Year 1 of Harry Potter.  And while Ron's trumpet playing might not be the best thing to listen to, watching the trailer will give you the password to unlock access to a the VIP section of the official site.