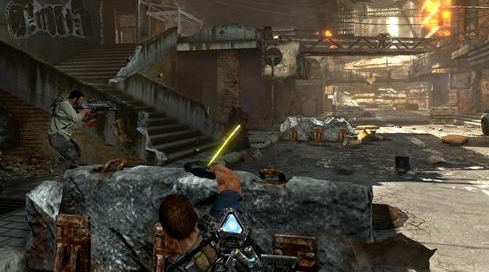 Namco Bandai is teaming up with Saber Interactive, the developers for the 2007 game Timeshift, to bring us a new type of co-op shooter. Inversion is set in one possible near-future, when Earth has been invaded by an enemy with the ability to openly manipulate gravity. Inversion puts you in the shoes of officer Davis Russel or his neighbor, Leo Delgado to search for Davis' child after the town has been turned upside down by the hostile invasion of the mysterious Lutadore.

With the idea of "manipulated gravity," it sounds as though we're going to get a bit of disorientation and variety through the levels. Since we're fighting an obviously advanced enemy, technologically advanced weapons help Davis and Leo in their struggle against the Lutadore. From the images we've seen, laser weapons will be prominent, but we can't wait to see the Grappler - our own ability to manipulate gravity however we please.

We'll keep an eye on Inversion and any upcoming announcements for the Xbox 360, Playstation 3 release scripted for 2010. As of right now, it's looking like it's online co-op only.