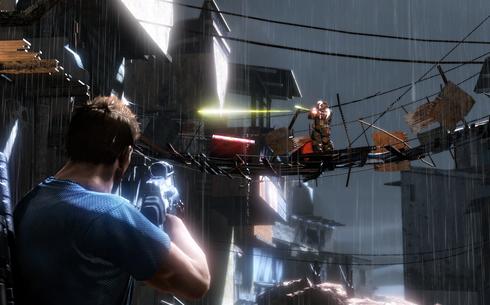 The official launch date of Namco Bandai’s newest installment, Inversion, was intended for February 7th of this year. However, several retail outlets, such as Gamefly and Gamestop, have recently altered the game’s release date on their websites, unveiling the delay of Inversion's official release for March.

Although Inversion had once set for a release date back in 2010, Namco had a bit of a setback in finding a new IP and had since changed its release to this February. Furthermore, with no official statement behind its current delay until March, the video game market will just have to sit tight and wait patiently as Namco irons out all of Inversion's remaining wrinkles.

So, what exactly will this game bring us? Think of Inversion as a perfect baby between two pop culture smash hits: the Gears of War 3 and that one scene from 2010's blockbuster movie, Inception. From the 2011 E3 trailer, Inversion seems to play much like a Gears title, but clearly adding an edge to its gameplay with gravity defying, “vampire-like”  abilities. Seriously now: who wouldn’t want to have an epic firefight while walking on walls or ceilings?

Take a quick look at the official Inversion trailer here:

While it does state that it will include co-op and multiplayer modes, little is known about how many players total it will support. Regardless, Co-Optimus will keep you informed over the course of these next couple months about the raw awesome that this game will most certainly bring you.