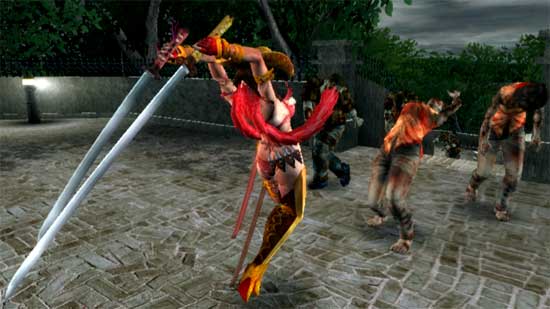 Sometimes you just know the title of a game is going to sell it.  Carmageddon for example.  Yeah, I'll buy that.  Doom.  Yup, sign me up.  Blades of Steel.  I'll take two please.

But when a game is called Onechanbara: Bikini Zombie Slayers we can't help but think they are going about this the wrong way.   Sure there's nothing wrong with women in bikinis slaying zombies.  In fact, we encourage it.  But something tells me the hardcore Nintendo fans of Mario and Zelda combined with the "non traditional" Wii-Sports gamers aren't your best target market.  You see, this is a Wii title.  Not a 360, not a PS3, not a PC...but a Nintendo Wii title.  Just think of the waggling possibilties for this one!

All joking aside the game does promise players the ability to use the Wii-mote "swinging and thrusting into zombie enemy hordes."  And of course we wouldn't be talking about the game if there wasn't some promised co-op feature, which there is.  It looks like two players will be able to play through the story mode each utilizing their "own unique fighting style."  Bikinis optional.

More info on the game is expected at this year's E3, as well we've posted a handfull of screenshots after the jump.

ZOMBIES BEWARE! THE BLOOD SISTERS ARE MAKING IT LADIES NIGHT WHEN D3PUBLISHER BRINGS THE ONECHANBARA VIDEOGAME TO WiiTM IN 2009
OnechanbaraTM: Bikini Zombie Slayers on Wii to be Unveiled at Upcoming E3 Media & Business Summit

CAMBRIDGE– July 10, 2008 – Zombies across the world will meet their match when D3Publisher (D3P) brings the popular bikini-clad samurai sisters Aya and Saki to our shores in Onechanbara™: Bikini Zombie Slayers on the Wii™ console. Bikini Zombie Slayers will ship to retail stores in early 2009, giving gamers their long-awaited taste of the series famous for its iconic characters and heart-pounding third-person hack-and-slash action.

In Onechanbara: Bikini Zombie Slayers, Aya is out to find the meaning of her IMICHI ancestors, even if it leads to the answer she does not wish for. Players can master the sword to take full advantage of the Wii RemoteTM motion controls by slashing, swinging and thrusting into zombie enemy hordes. Play as either sister Aya or Saki in single player or with a friend in Co-Op Mode and utilize each of their unique fighting styles and set of moves. Get too much blood on either sister and be driven into Rage Mode and gain more power and agility to destroy enemies faster and deadlier. Every person met and enemy battled brings the sisters closer to understanding who or what is behind the zombie outbreak and putting an end to it.

“Onechanbara perfectly blends the thrill and excitement of a zombie-filled horror flick with a pair of sisters that pack a powerful sword behind impeccable beauty,” said Yoji Takenaka, executive vice president and chief operating officer, North America and Europe, D3P. “Gamers will be delighted that a lot of features have been included to make a fun and easy to pick-up and play title at a great price.”