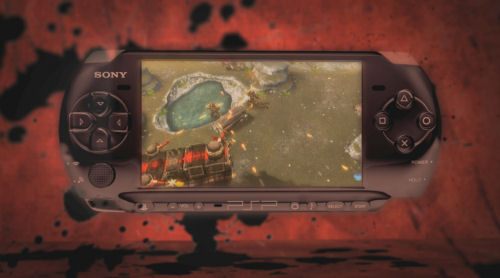 If you read our hands on preview with Army of Two: The 40th Day on the PSP you'd know the game is quite a bit different than its console counterpart.  Now you can see it in action for yourself and the first vibe I get from the game is an updated Total Carnage.

It's Salem and Rios from a top down perspective in a bullet hell filled world, kicking ass, and taking names.  Could there be a baby milk factory in the duos future?  Watch the trailer and find out for yourself.  The two player co-op PSP version hits the same day as the Xbox 360 and PlayStation 3 - January 12th, 2010.

Thanks to Jim's quick eye, the last few seconds of the trailer appear to show some other EA property's main characters as bonus playable characters.  Both Issac Clarke from Dead Space and Dante from Dante's Inferno appear to be selectable!