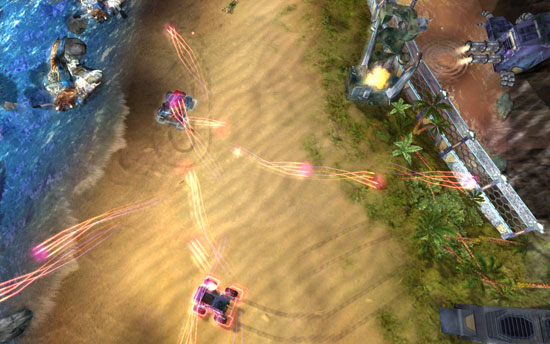 We just received word that Assault Heroes is coming to the Playstation Network in 2010.  Described as a "direct port" of the Xbox Live Arcade original, Assault Heroes for the PSN will feature two player co-op, local or online.  Tons of weapons, destructible environments, cool vehicles, and of course lots of explosions will tempt fans of old-school overhead shooters when it's released next year!

"Assault Heroes was an extremely successful title on Xbox LIVE® Arcade, so it was only fitting for us to bring it over to the PlayStation®Network, where all gamers could get a taste of the intense arcade action," said David Daniels, Director of Marketing of Konami Digital Entertainment Inc. "As the demand for downloadable content grows, Konami continues to deliver quality titles and judging by the track record of Assault Heroes, this was the perfect game to bring back for fans to enjoy on an entirely new platform."

Players begin the game as the only surviving members of an elite Special Forces Unit tasked with uncovering a classified weapons program hidden deep within a secret underground lab. Featuring vibrant graphics and intense environments such as enemy war camps, Assault Heroes offers an arsenal of weapons including devastating flak cannons, flamethrowers and grenades to navigate through the levels. Assault Heroes also features interactive destructible battlefields and underground areas to discover, as players are able to explore environments by foot, speed boat onto sea, or traverse through the lands in a heavily armed 4x4 artillery vehicle. Missions can be played in single player mode or in 2-player cooperative mode with a friend locally or online in order to strategize their plan of attack. As an added bonus, competitive rankings on the online leaderboards can also motivate players to execute the sinister alien force and fight their way to the top of the charts.

Assault Heroes will be available for download in 2010 for the PlayStation®Network. For more information, please visit http://www.konami.com/downloads.