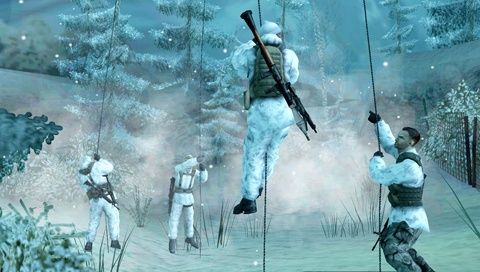 While SOCOM: Fireteam Bravo 3 is indefinitely delayed, which probably isn't as bad as it sounds, Sony has decided to tease us with some fresh new media from the PlayStation Portable title.  We have a fresh batch of screenshots and a trailer showing some in game action for the four player co-op title.

Under the cover of snow the SOCOM team storms a lodge in an effort to take back the presents the Grinch stole from Christmas.  Teamwork and communication is on display as the mission is carried out and Christmas is saved once again.  Ok...that's not really the story - but if the Grinch was in the lodge - he's dead now.  I wonder if they'll eat Roast Beast after the mission is over?