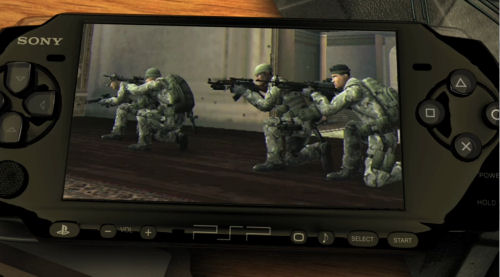 SOCOM Fireteam Bravo 3 was released this week on the PSP, complete with four player local and online co-op.  But if you want access to any of the game's online modes, including the co-op and versus modes, you're going to have to jump through a few hoops to get it.  Why? Sony says it's to combat piracy.

To play online you'll need a PlayStation Network account as well as an additional "activation step" which comes in the form of an online voucher included in the game's box.  It's a minor annoyance, and one that's automated for the digital version of the game, but it is an annoyance none the less.

IGN chatted with a Sony representative about the new registration requirement.

IGN: Why has Sony waited until now to implement this feature for a PSP title? And why for only one title?

John Koller: Today's consumers are more tech savvy and better connected to the Internet than ever before. Piracy continues to be an issue of concern for the PSP platform. SOCOM: U.S. Navy SEALs Fireteam Bravo 3 is a trial run for a new initiative we are exploring for the platform. We will continue to explore this as an opportunity for the platform going forward, but we have no announcements to make on future iterations at this time.

As the saying goes, it's a trial by fire.  I already know a few people who were put off by this decision and have now decided not to buy the title.  They did not want to support this type of control of a product.

EA has been doing something similar with its games recently, Madden 2010 required a code included with the game to access online leagues, Mass Effect 2 included a code to access the Cerebus Network for exclusive DLC, and future titles from EA are offering similar programs. One side effect of a system like this is it doesn't only "combat piracy," it also hurts people who rely on getting their games via used sales or rentals.  These people will no longer have access to the full feature set of the game, and in the case of rentals, may be less likely to convert that rental into a full purchase.

If you obtain the game via a used sale or rental you'll have to drop an additional $10-$20 to access the content that was included with the original game, almost negating any discount you received by getting it second hand.   In the case of SOCOM Fireteam Bravo 3, the price is $20 to activate online play without the include voucher code - that's half the price of the game.  In comparison EA's method requires purchase of content that is one sixth the price of a the game.

Other publishers are trying unique methods to get people to hang onto copies of their games - THQ recently revealed that people who bought Darksiders last fall had a hidden code in their game box that can be redeemed for a free copy of Red Faction Guerilla.  Halo 3: ODST owners have been hanging onto their disc to have access to the Halo Reach beta.

It's a smart move by publishers, from a certain perspective, and they may see somewhat of a boost in game sales initially, but the long term effects of it have yet to be seen.  But as we've seen, it could also have the opposite effect.  So whether these moves are to combat piracy, slow down used game sales, or just make publishers more money; it's something consumers need to be aware of.

Do you feel slighted at all with moves like these?  Or is this merely a necessity publishers must take in these tough economic times?