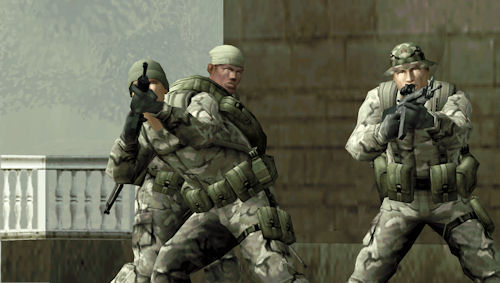 As any Co-Optimus reader can probably tell you, our staff has a sweet tooth for kooky and interesting co-op games. Fairytale Fights...50 Cent: Blood in the Sand...'Splosion Man...the crazier it is, the more we get a kick out of it. Well, this week I inadvertently stumbled into one such trippy experience while playing the rather serious SOCOM: Fireteam Bravo 3 - it was called Tea and Cupcakes, and it was all sorts of strange.

Picture yourself armed with an automatic rifle, complete with laser targeting and holo sights. Picture camouflage, beanies, and thick-soled boots. Now picture a maid in a pink dress attacking you with a 9mm Uzi submachine gun - because you're here to steal her cupcake. Does this mean you haven't picked up the dry cleaning yet?

That's 'Tea and Cupcakes", a hidden co-op mission that can only be unlocked by joining a game in which - like the Red Dead Rockstar Achievement - the host has previously unlocked it and is now inviting others to experience the...pinkness. Oh, yes: the walls are pretty much all pink. Unless they're purple. Some of them have heart patterns running in a trimline around the room. A pink haze permeates the entire mission, and maids wearing the colors of Easter defend human-head-sized cupcakes. Which you have to steal.

There are two objectives in the mission. The first is to basically kill all of the evil maids, plus one loopy old gentleman in a gaudy red three-piece suit. The second is to steal all eight cupcakes, which are located on your tac map. Completing the mission grants a minimum of 5,000 Command Equity (CE) points, which is a nice reward, and also unlocks all of the maid outfits and the red-suited old man for multiplayer. You will definitely earn every bit of it, though, because enemy difficulty and stamina are significantly increased. Four-player co-op is really the way to go in "Tea and Cupcakes". If you don't believe me, rest easy - you're not the first. This secret mission popped up in seemingly random servers, prompting its status as a bit of SOCOM lore...a legend among Sony's forumgoers. For a couple of weeks after SOCOM: Fireteam Bravo 3's release, "Tea and Cupcakes" was merely a rumor. Now that I've experienced it myself, I can attest that it does indeed exist. Just in case you were wondering.