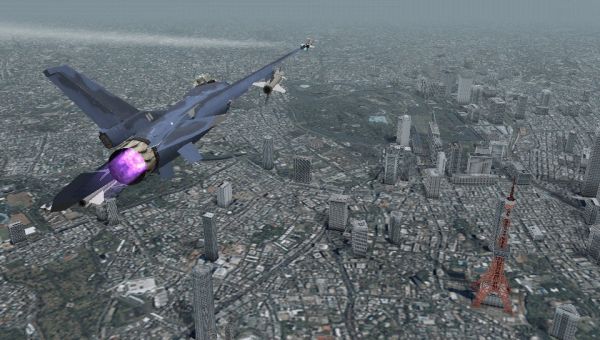 Namco Bandai has officially announced the return of Ace Combat to the PlayStation Portable, with Ace Combat: Joint Assault. This time around, co-op steals the show - up to four wannabe pilots can join each other to patrol the friendly skies via ad hoc (LAN), Ad Hoc Party, or online.

At this point, no solid release date has been given other than sometime in 2010. IGN was able to steal a quick preview from the in-house development group, who promised updated visuals, real-life cities (new to Ace Combat), over 40 flyable aircraft, a mysterious Enhanced Combat View, and eight-player multiplayer in addition to the core co-op.


The Premiere Flight-Action Series Returns to the PSP® system with Breathtaking Visuals, Unparalleled Dogfighting and a Robust Multiplayer Experience

Developed by Project Aces, ACE COMBAT JOINT ASSAULT blazes onto the PSP system with edge-of-your-seat action as new aircrafts scream across the sky through multiple real-world locations including Tokyo, San Francisco, and London.  An advanced enemy A.I. changes the mission flow dynamically based on decisions made within the campaign, forcing players to strategically plan their attack.  A sophisticated dogfighting system, increased sense of speed and photorealistic graphics, make ACE COMBAT JOINT ASSAULT one of the most intense experiences ever on a handheld system.

Take to the skies and reign supreme as a top Ace pilot in a variety of ACE COMBAT JOINT ASSAULT’S action-packed adversarial and team-based multiplayer modes via ad hoc or infrastructure.  Team up with three friends to take down the forces of evil in campaign mode, featuring the specially designed Joint Assault Mission System.  Players break off into two teams and simultaneously complete objectives on two separate maps.  Objectives completed on one map will affect battle conditions on the other.  ACE COMBAT JOINT ASSAULT also includes intense eight-player adversarial matches across a variety of locations.  Strategic planning and a steady aim will be paramount to your victory as advanced aircrafts screech through the sky with only one objective in mind - taking you out of it.

“The Ace Combat series continues to be the premiere flight-action game across multiple consoles,” said Todd Thorson, director of marketing and public relations for NAMCO BANDAI Games.  “ACE COMBAT JOINT ASSAULT takes the series in a new and exciting direction with the inclusion of four-player cooperative campaign mode and eight-player adversarial modes.”