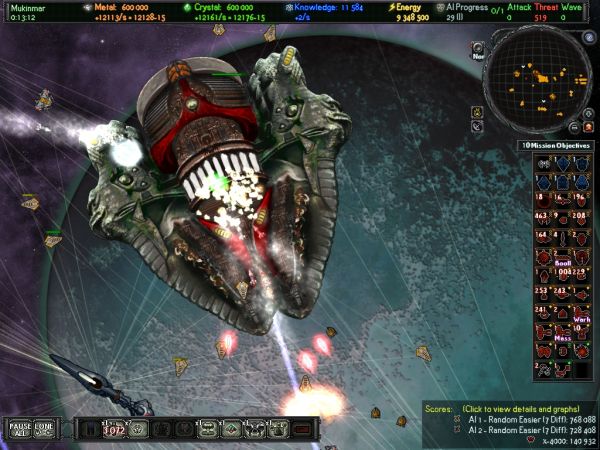 The next big expansion pack for AI War is out, titled The Zenith Remnant, it contains a ton of new features, units and more.  It's absolutely massive in size.  Listen to these numbers:  122 New Ships, 14 new ship classes,  12 new AI Types, 40 minutes of new music, a tons of new maps.

Not content with all that content for just $9.99, Arcen games also brought the core game up to version 3.0.  All of those features and tweaks we've posted below.

If you're interested in AI War and the game's expansion, AI War: The Zenith Remnant - you can get both for the price of one via Steam and Impulse.  The core game is only half price right now.

- Updated art for many ships, including larger and more impressive command stations, space docks, fortresses, colony ships, and more!
-New starships: The Raid Starship line has been split, so that now there is a Raid Starship line (Mark I-III), and a separate Leech Starship line (Mark I-III).
-New capturables: Fabricators, which let you manufacture (the previously AI-only) Mark V ships, Bomber Starships, and more!
-Co-op improvements: Players who have lost their home station, or who join the game late, now get a “Home Command Station Core,” which provides them with the resources and build capacity they need to keep playing in a fun way without slowing the other players down. Other minor changes also abound, such as messages to allied players when technologies are unlocked, and improvements to engineer assistance from allies.
-AI Improvements: The AI is smarter and more devious than ever, while some of the more game-flow-interrupting tactics such as Cross-Planet Attacks have also been made less frequent. Ship autotargeting is now notably better for both the players and AI.
-Performance Improvements: The game now performs 400% to 1000% better in supermassive games of (those with 100,000 to 200,000 units on the map), and on average 20% to 80% better on regular sized games (usually 80,000 units or fewer).
-Interface Improvements: A wide variety of player-suggested minor tweaks have been made to the interface, leading to ever-improved usability. The planetary summary now has category-colorization on mouseover, planet names are colorized by owner status in the galaxy map, “control nodes” have been added to allow new automation options for players, amongst many others.
-Other New Ships: Rally Posts allow for directing incoming allied forces to a specific place on a planet, Cleanup Drones remove exploded enemy mines and turrets, and Mine Layers have turned into more generalized Remains Rebuilders which can auto-rebuild turrets as well as mines for players (both AI and human, so be sure to use Cleanup Drones on enemy planets).
-New Minor Factions: Minor Factions aren’t just for customers of the expansion! Three new minor factions have also been added to version 3.0 for all AI War players (optionally enable any combination of them through the lobby).
-Human Marauders are a hostile minor faction that will sometimes attack you or the AI from deep space, using their powerful new Buzz Bombs and Dagger Frigates.
-Human Resistance Fighters are an allied minor faction that will sometimes decloak from deep space and join you in assaulting AI worlds with their powerful new Fighter/Bombers and Frigates.
-Rebelling Human Colonies are formerly-captive human cities that need your help in order to survive -- fail and you’ll see an increase in AI Progress, but succeed and your entire team will be able to build the powerful new ships used by the Resistance Fighters.
-Ship Balance Updates: Many minor and major ship balance adjustments have been made – the most notable of these is that the core fighter/cruiser/bomber triangle has been redefined into an easier-to-follow fighter/bomber/frigate triangle.
-Game Flow Improvements: Not only are the disruptive cross-planet attacks less frequent, but all human ships now move 40% faster (making it easier to stage defenses or coordinate assaults – especially so since AI ships are still the same speed as before), many new automations have been built into the interface (the most notable of which is that metal/crystal harvesters are now automatically rebuilt on human planets after hostile AI forces are gone), and a few key structures (space docks, factories, etc) have been made more robust. Players will spend less time than ever on repetitive tasks, letting especially new players take to the stars faster.
-And Much More: The full release notes for version 3.0 (not including expansion notes) are over 10,000 words long. This is by the largest single release AI War has ever seen, and no small wonder – it was three months in the making! Future free DLC updates will resume their monthly schedule.