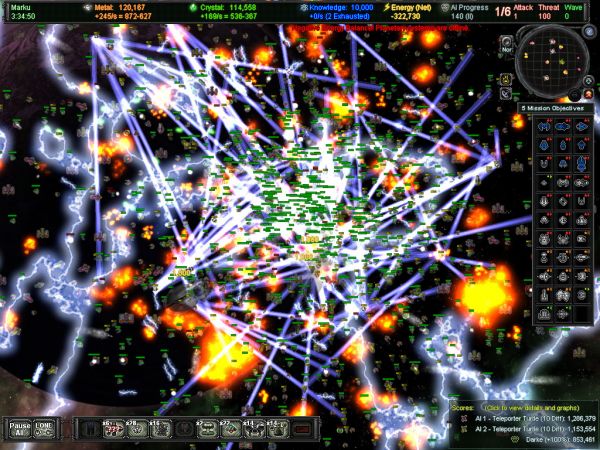 Arcen Games has just patched their co-op RTS, AI War, to version 1.301.  With it brings a host of improvements to both the interface, ship graphics, new units, new network code and a host of other tweaks.  Considering the game claims you can have 30,000 units in a battle at once I'm sure the net code needs to be very neat and tidy for a lag free co-op experience.

The best addition is the ability to drop-in and drop out of a co-op game whenever you want.  A good update all around.  While you wait for it to download, how about counting all of the units in that screenshot above?

Key new features from 1.301:
- 4 new ships: Decloaker, and three levels of a new Gravitational Turret.
- Major visual improvements -- the HUD, the galaxy map, menus, and ship icons have all been revamped.  We have updated our screenshots, which gives a nice before/after contrast.
- Co-op Enhancements -- players can drop in and out of games if needed, and all ships can be swapped around between players much better now.
- New "Supply" game mechanic augments the military importance of captured planets.
- Several AI improvements to add better tactical intelligence in a number of different scenarios.
- New UDP-based network code performs vastly better in high-latency or high-packet-loss environments.
- New render caching performance improvement redcues GPU load in large battles by 1/2 to 2/3.
- More updated battle sound effects, and an updated battle sound effect engine, makes the sounds of battles much better.
- Resizable minimap -- helpful in particular for larger monitors, there are now 3 minimap sizes.
- Force Fields controlled by players are now damaged by shots fired out from under them, but FFs can all now be moved and repaired.
- Many other balance tweaks, ship logic improvements, and other enhancements and bugfixes.