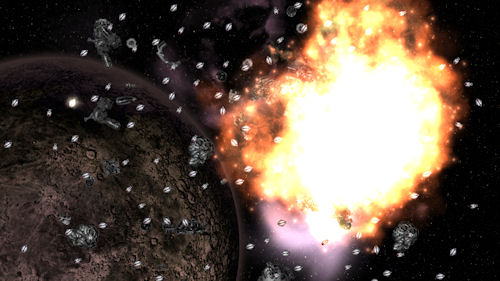 Arcen Games have just released a brand new version of AI War bringing it up to version 4.0.  The game's creator, Chris Park, touts this as the biggest update to the game to date.  The largest change, without a doubt, is a complete rewrite of the game's engine in the Unity 3D Engine.  Doing so allows for fancier effects and graphics - and more importantly - cross platform support with Macs.

But that's not the only update.  Included in 4.0 are 147 new ships, a complete remastering of the game's soundtrack, a user interface redesign, balance changes, and ship cap changes.  All of these updates are free for existing owners of AI War - including the expansion packs.

AI War Supports 8 players in co-op through a variety of scenarios and options of play.  It's unique feature has always been the sheer amount of ships on the screen - a number that was said to be capped around 30,000 but in reality saw players have upwards of over 100,000 ships in the game at one time.  Sadly the only way to manage that many ships is with an army of Korean StarCraft players.