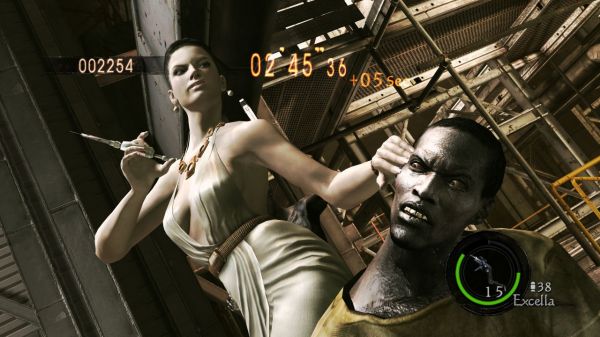 As a man there's one thing I've always wanted to do - put on a dress and makeup and go out and kill some zombies.  Wait, scratch that.  I, um... meant to say that a new bonus playable  character has been added to Resident Evil 5 Gold Edition in the co-op Mercenaries Reunion mode.

The character is Excella Gionne, who you may remember from the game's main plotline as "the sexy yet deadly female villain."  You'll be able to slip on some silky white evening wear and stab an infected Manjini in the ear with a needle.

Also announced with Excella are some bonus moves for Josh Stone and Jill Valentine in the Desperate Escape bonus content.  Josh has a new elbow drop to lay the smack down on some unsuspecting zombies, while Jill can give the Manjini the ride of their lives as she wraps her legs around their head...and twists to break their neck.

Enjoy the new screens of all this content which starts hitting the Xbox 360 and PlayStation 3 in just a few weeks!