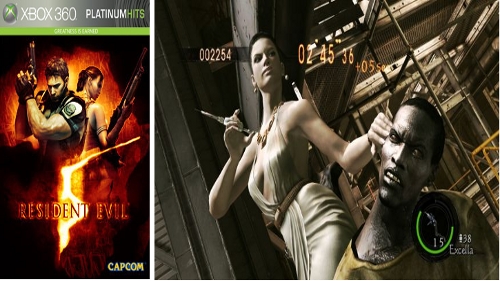 Just in time for the release of the first of two new DLC packs, Resident Evil 5 joins the list of great co-op titles (one of which is slated for tomorrow's XBox LIVE Co-Op Night) available through XBox LIVE's Games on Demand service.  Now, I'm sure the question many of you are asking is, "Shouldn't I just wait and buy the Resident Evil 5 Gold Edition that's set to be released in three weeks' time?"  Well, if you crunch the numbers on all of it, snagging the Games on Demand version of Resident Evil 5 ($29.99) and all of the DLC as it becomes available, which in total will come to 1520

, will set you back about $48.98.  That's just a couple dollars more than the current pre-order price for the Gold Edition on Amazon of $46.99.  To put it another way, picking up the game and the "Lost in Nightmares" DLC now gets you an additional three weeks to enjoy the new Jill and Chris chapter, as well as zombie slaying with Excella and Barry Burton in Mercenaries mode, and an additional week with the "Desperate Escape" DLC, all for just $2 more.