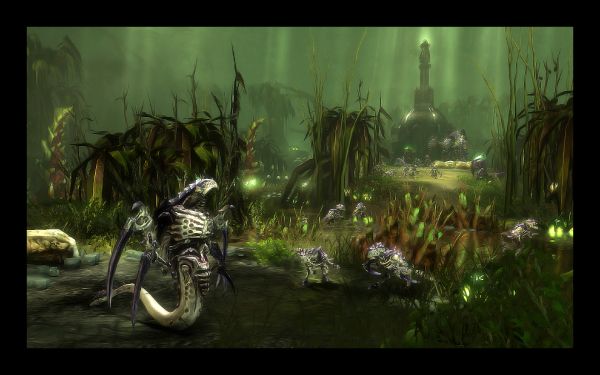 Counting down to the Dawn of War 2 DLC expansion titled "Chaos Rising," the developers have started releasing details about the two new Commander heroes for the Last Stand mode. This week we learn about the hulking beast of a Tyranid Hive Tyrant - who's durability and swarm summoning abilities make him a force to be reckoned with.

A few highlights from the Hive Tyrant's profile include; his bulky armors natural ability to withstand knockdown or suppression fire, summoned minions that are great for routing out potential threats, and a healthy dose of venom toxins that heal your troops while hurting your enemies. The community site for Dawn of War 2 has a much more detailed list of wargear and strategy, but this is our favorite example from the developers Load Out strategy.

"I’ve strategically decided to stay away from the Hive Tyrant’s array of options for dishing out poison damage to focus more on damage mitigation for my minions. The High-Toxin Venom Cannon is another key component to this load out, providing healing to my minions with every hit. This keeps my warriors alive and knocking down enemies fulfilling a key support role for my entire team."

But, don't think you have to be a bored little Commander hiding behind your minions. The Hive Tyrant is perfectly capable of gouging his enemies to bits if they wander a little too close. Its hefty armor limits his speed and mobility, but if you get tired of just sending minions out to do his dirty work, Heavy Talons and a Thornback charge is bound to make your foes quake.

We can't wait to try out the balance between minion strategy and brute force with this Hive Tyrant, and we hope you'll join us in Last Stand when he's available. That's March 11th for North America, and March 12 for Europe. Be there, or be lunch.