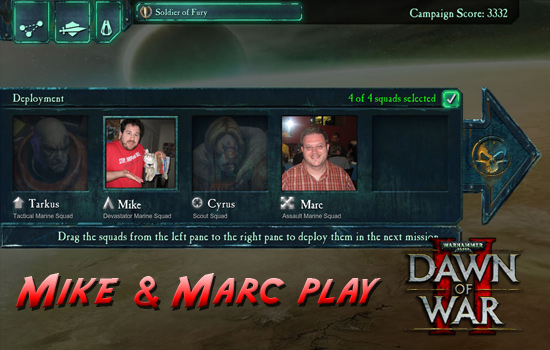 We begin a new mini-series of articles today.  The purpose of "This Week In Co-Op" is to rant and rave a bit about what we've been playing, but, oddly, there hasn't really been much about staff team-ups.  That ends today, and for the next few weeks, you'll be finding an article written in true co-op fashion by two of our staff members.  This week, we've got Mike, artist extraordinaire, podcast host, and new daddy, and Marc, senior editor, retro gamer, and a somewhat older daddy.  So what did these two fellas get into this week?  Well, it turns out, being a daddy means it's hard to find free time to play co-op with each other.

June 9
Marc: Any ideas for our shared This Week In Co-Op for next week? Whatcha wanna play?

Mike: Does Duels of the Planeswalkers have online? I forget.
Darn, guess it doesn't. (Which is the dumbest thing ever.  Or at least, it's one dumb thing.)

What games do you have that you'd be interested in playing? I've got most of the standard stuff and  I         can always pick up an arcade title if we decide on one.

Mike: Sounds great. I don't have the expansion though.

Marc: Neither do I, so no problem.


So far, so good.  A game has been agreed upon, a time has been set, and all that's left is to wait for the fun to begin.  However, due to the E3 madness and all the behind the scenes business that entailed, Nick made the executive decision to postpone all articles for a week, including This Week In Co-Op.  Kinect, the 3DS, Move, and a whole host of other cool things later, we all but forgot about our Dawn of War 2 date.  At least, I did. [Mike: I remembered, but I was feeling pretty lazy that day, which let Marc off the hook!]

Marc: Yikes I totally forgot. Are you available later tonight? Supposed to see a movie tomorrow night. Free during day tho.

Mike: I am not available tonight, it's been a really, REALLY bad day.  (Probably because no Orks died at his hands all day.) [Mike: He's right.]

June 22
Marc: Cleared the evening. Let me know when to meet so we can plan dinner around.  (Co-op > movies, but dinner > both.)

Mike: I can be free for an hour at 8pm est.
Marc: See you then.
Gonna be a tad late dinner ran long.

Mike: Gonna cut it close, my brother decided he's gonna drop in for a surprise visit sometime between 8 and 9... sheesh

Marc: Lol should we just skip it?

Mike: No, we must press on! (Spoken like a true Space Marine.) [Mike: FOR THE EMPEROR!]

Marc: Maybe a fast and dirty XBLA instead?

And, a few minutes past the arranged time, we finally fired up Steam.  It wasn't long before Mike joined my campaign, which I hadn't played since last December.  (Unbelievable!  I hate Steam sales, or, more precisely, not having time to enjoy games I bought during Steam sales.)  I didn't have a headset hooked up, which could have been a big issue, but thankfully, due to Mike's mad skillz [Mike: My skills include charging blindly into Tyranid nests while Marc isn't paying attention, and managing to revive my Force Commander before he notices I died.], we managed to clear a couple missions without too much problem.

Then, we played a mission in Mike's campaign; it was really fun to see all the end-game units and the chaos of war was just that much more enjoyable.  [Mike: Except when the mission bugged out and didn't give us credit for completing the objective!]  It may have been a hassle to set up, but the time spent blowing stuff up and wallowing in the blood of alien races was certainly worth it.  Once our allotted hour was up, we bade each other farewell, and went off to do what can only be described as daddy-like things.  Even bloodthirsty Space Marine warlords have to take time to change diapers and tuck kiddos into bed.  But please don't let the orks know that.