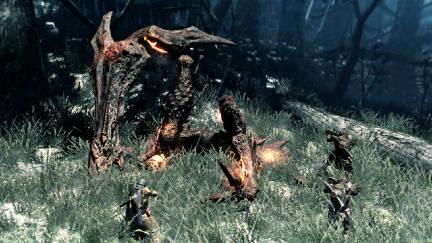 One of the biggest gripes that many co-op fans have with otherwise excellent co-op games is that you can only play cooperatively with friends online.  This is no good if you like the warmth of another human being and want to play games on the same TV.  The latest news from Capcom should help appease this sociable sort as they confirm in Japanese game magazine Famitsu that Lost Planet 2 will have splitscreen co-op.

Lost Planet 2 will feature offline 2 player co-op, similar in fashion to that used in Resident Evil 5 with the screens staggering; this means that the aspect ratio stays the same, but not all of your television screen will be utilized.  The offline-only 2 player splitscreen may lead to problems of its own, as a Co-Optimus forum thread on Borderlands showed.  Meanwhile, the 4 player co-op elements of the game will remain online only and, with a May 18th release date, it won't be too long before we can all take on some alien fauna.