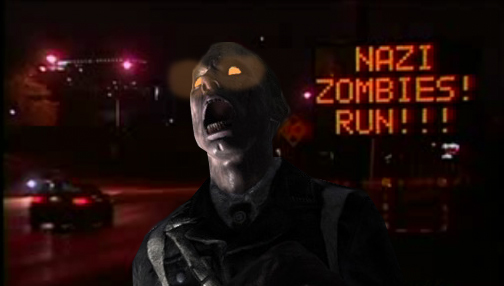 In all the Modern Warfare 2 hubbub and Call of Duty 7 rumors, Treyarch's Call of Duty: World at War and its decidedly fun add-on mode Nazi Zombies has gotten overlooked. Truth be told, Nazi Zombies could have been reviewed as an entirely different game (and if our wish for a standalone downloadable title is ever granted, it may well be).

As of last week, the Verrückt map has been made available for the Nazi Zombies port on iPhone - the price is $5. Also, all three map packs for the Xbox 360 and PlayStation 3 versions are available as a bundle for $25 (or the equivalent in MS Points). PC players can still download all three map packs for free. If you haven't played Nazi Zombies before, now is as good a time as any.

on iPhone® and iPod touch®

Named as one of iTunes Rewind’s Best Apps of 2009, Call of Duty: World at War: ZOMBIES faithfully delivers upon the experience of one of the most popular and played online games of 2009. The game offers limitless rounds of a single player experience in addition to a highly-addictive co-op gameplay experience in full 3-D, allowing up to four players to join a game via Wi-Fi, locally or across the Internet, and up to two players via Bluetooth.

The original Call of Duty: World at War: ZOMBIES App, developed by Ideaworks Game Studio for the iPhone and iPod touch based on Treyarch’s console version, is available for $9.99 from the App Store at www.itunes.com/appstore/.