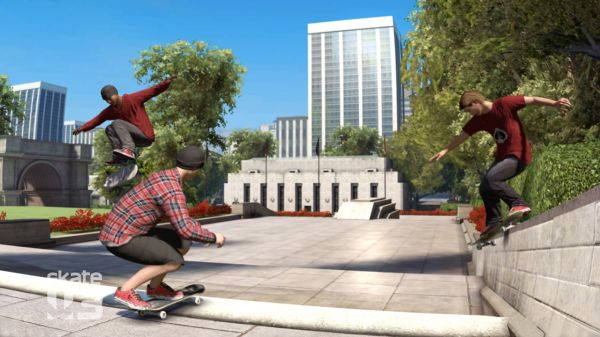 It's been sometime since we've heard from Skate 3.  In fact, we haven't heard anything about it since we covered the community day back in November of last year.  With a few months left till release, fresh media and info is starting to ollie on in.

We just got a fresh batch of screenshots showing off the game's co-op career mode, and as you can see, it's coming along quite nicely.  Environments look crisp, character models look solid, and textures look detailed.

Joystiq managed to get some hands on time with the co-op career and seemed to enjoy the brief stay with it.  They praised the game's animations and challenge system, but new details were also revealed.  The most interesting thing seems to be the game's social options that will be available.

The first two we tackled were interesting in that the results could be shared via the game's website for the world to see -- not just scores, mind you, but photos and videos as well. For the video challenge, all three us us had to grind railings, ollie over some steps while performing a trick, then grind around a planter located on the college campus where the event was taking place. There was a time limit, and once we'd all managed to perform the feats, our scores were tallied, the video saved and our careers furthered based on how we did as a team.