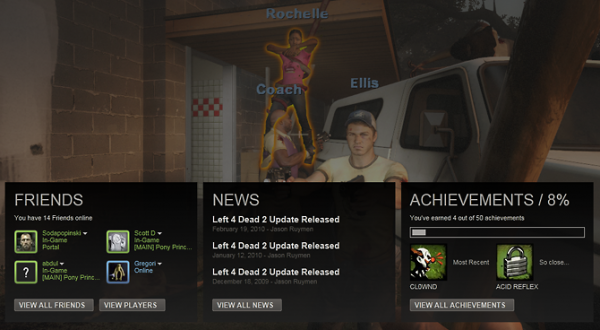 Valve has launched a beta for a new version of Steam with a complete UI overhaul.  This is the first major overhaul of the service since it launched almost 7 years ago.   Anyone can opt into the beta by simply checking a setting in your Steam client.  Restart Steam and voila!

There's quite a few new things to look at, and right from the get go I can tell you this bad boy is beautiful.  There's a lot more information available now to you, and it's become incredibly easy to find people on your friends lists that play and own the games you own.  You'll never be lonely in Left 4 Dead 2 again!

Other improvements is the ability to create custom lists of games to organize your growing collection, no doubt thanks to recent Steam sales.  Achievements are easier to read and discover, and the store and download manager has added features.  Ready for the complete list of changes?

New game details view, presenting a detailed view of all the information for a single game in your library

New downloads view in the client, making it easier to track your progress downloading new games or game updates

New game-specific video page, containing all of a game's trailers in one place, now in higher resolution Flash format

New search filtering options- search for packs or DLC, easier to use filters for searching by price and metascore, and sort by release date

Clock in the in-game overlay (!)

User customizable categories assignable per-game, by which the various game library views can now be filtered

Implemented new DirectWrite based font rendering for the client and in-game overlay on Windows 7 or Vista with both SP2 and the "Platform Update" installed. This offers improved pairwise kerning for text layout as well as better anti-aliasing of text on supported platforms.

Type to jump support in the games list, grid, and game details views

Better Steam cloud conflict resolution support, with the ability for users to choose how to resolve conflicts between machines

New style and layout system for Steam's VGUI UI toolkit, enabling much more complicated flowing layouts. Skins will need major overhauls to be compatible with the new client, but will also have much more power and flexibility available to them via the new .style and .layout files used in the new VGUI code.

Community: all official game avatars in one place, linked from your edit profile page

Support for alpha blending of gradients and text in VGUI

Support for many new layout and placement commands in VGUI

Improved truncation of long text strings in many places

Fixed forward/backwards navigation on Community tab getting stuck on redirects