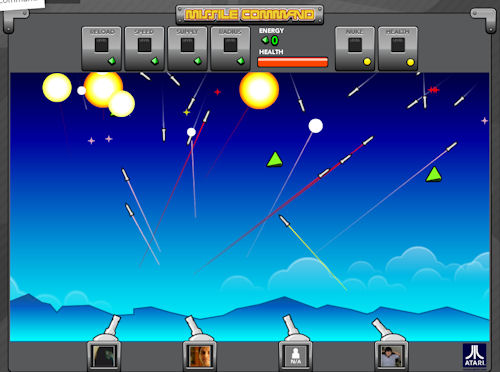 Believe it or not it's been 30 years since the classic game Missile Command has hit the arcade.  In celebration of the milestone Atari has partnered with web game portal OMGPOP to create a 7 player co-op version of the game that's completely free.

I spent a few minutes and checked out the flash game and it's nothing short of insane, and I was only playing with 3 other people.  The main difference here is instead of protecting multiple cities, each player controls a gun to shoot down the incoming missiles.   You'll have to work together to not only save your own butt, but your team mates as well.

Joining a game is pretty painless, and you don't even need an account to play.

Here's some of the features:

·         Unlimited Levels - play with increasing challenge as you progress

I'd love to see something like this hit Xbox Live Arcade with voice chat!