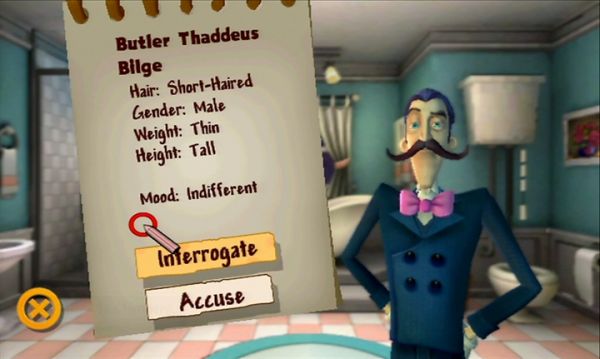 It's a question that has persevered through the years, and Guilty Party is ready to answer: "Who dunnit?" Work together with drop-in drop-out style co-op to solve various cases by the creative geniuses of Wideload (Stubbs the Zombie) and the new improved Disney. Wired.com got hands on with this title, and we get to share that preview or the benefit of all co-op kind.

As a co-op game, players will take turns investigating different areas. You'll be searching for clues, or interrogating people that may have potentially involved in whatever crime you're investigating. In order to do your investigating, you'll complete a series of mini-games. You can bribe people by placing money in their hands, or stare them down. Some of these mini-games are cooperative in nature, but it sounds like you'll be doing a lot of trading-off for the most part. Of course, being a Wii game, that also means you'll be helping each other out verbally, which is equally helpful.

Once you complete your mini-games, you'll get clues in a notebook to build a profile of exactly who you are looking for. Then, based on the clues you get, you formerly accuse someone - but be careful, you have to prove you have all the right pieces. No guessing here. Hopefully it's not always the Butler, but if Clue has taught me anything: never trust the hired help.

In order to understand the humor we speak of a little better, Chris Kohler at Wired.com said:

"I laughed out loud quite a bit while taking Guilty Party for a spin. The cast of detective characters shows up at the beginning and end of each mystery in the story mode, in story sequences that are genuinely funny, with great dialogue and comedy timing. While the game can create an unlimited amount of random cases for you to solve, in much the same manner as Clue’s card-shuffling, it seems as if you’ll want to play the story mode first for all the well-paced humor and the plot that runs through all the cases."

Seriously though, Guilty Party sounds like a very intriguing who dunnit type of game. Given the creative minds of Wideload behind the scenes, I would imagine we can expect something brilliant here. We hope to play Guilty Party sometime in the second half of 2010.